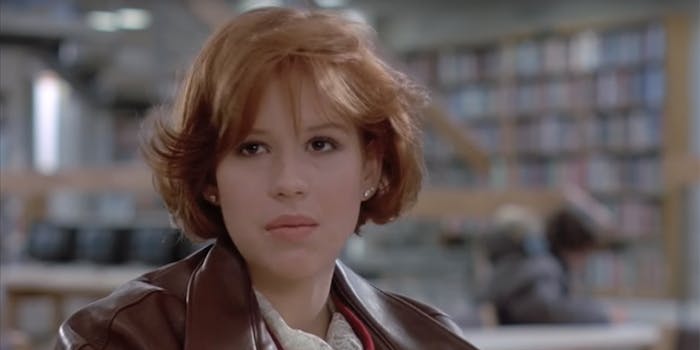 'I was taken aback by the scope of the ugliness.'

In the face of people who will always lament “that’s just how things were back then,” isn’t easy to analyze relics from the past—especially art that was, and is, considered powerful cultural pieces—that represent antiquated points of view. And it certainly isn’t easy to offer a nuanced analysis, suggesting that you can admit what would now be lambasted as taboo while still revering something for its artistry and innovation.

But in an essay for the New Yorker, Molly Ringwald does just that. Reflecting on John Hughes films—particularly the ones she starred in—Ringwald discusses how she sees them now in light of the #MeToo movement and evolved social standards regarding women and sex.

The actress and writer, who in the 1980s was hailed as a cultural icon for her roles in The Breakfast Club and Sixteen Candles, explains how her thinking about the former film changed when she watched it with her then-preteen daughter.

She describes the “strange experience” of revisiting the scene where John Bender peaks under the skirt of her character, Claire, and how it led to her analyzing the span of Hughes’ work from the ’80s. Unsurprisingly, she found a lot of it to include outdated ideas regarding women, LGBTQ people, and racial minorities.

“Yes, it was a different time, as people say,” Ringwald writes. “Still, I was taken aback by the scope of the ugliness.”

In her essay, she turns a critical eye to scenes in Sixteen Candles and The Breakfast Club that could now read as sexual assault. She interviews both a fellow actress and a fan to get their points of view on how certain issues were portrayed in the films.

Ringwald’s writing both scrutinizes Hughes’ work and exalts him as a director, with whom she says she had a “symbiotic relationship.” Ultimately, Ringwald concludes, the films are transcendent in that they still offer teenagers a way to both claim and subvert the identities presented.

“Erasing history is a dangerous road when it comes to art,” she writes. “Change is essential, but so, too, is remembering the past, in all of its transgression and barbarism, so that we may properly gauge how far we have come, and also how far we still need to go.”

Read her full essay over at the New Yorker.