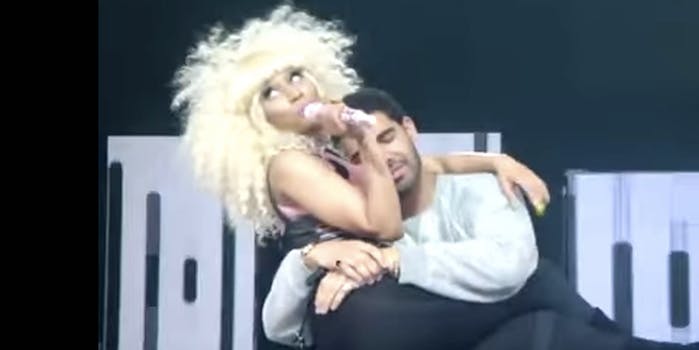 Two of the biggest stars in hip-hop are on speaking terms again.

Nicki Minaj posted a photo of her and Drake kicking back together on Wednesday morning. Then she shared another with herself, Drizzy, and a smiling Lil Wayne.

Drake and Nicki had a significant blowup, lasting from 2015 into 2016, when Minaj dated excitable Philadelphia rapper, Meek Mill—who clashed with Drake over ghostwriting. Mill was subsequently the target of multiple diss songs by Drake, including “Back to Back.”

“I don’t really talk to Nicki,” said the Toronto rapper, being interviewed by Zane Lowe last year. “[She’s] another person I have a lot of love for, a lot of respect to her and the past and what we built.”

Drake really is Nicki's biggest fan after all this time. Wow. pic.twitter.com/73HI6JuwxJ

There’s some unverified information on their reunion, which involves a Jan. 8 TV segment that prompted the connection. According to TMZ, the pair met in Miami on Jan. 12, along with Lil Wayne, and reconciled their respective friendships.

As of this writing, Twitter commenced with roasting Meek Mill.