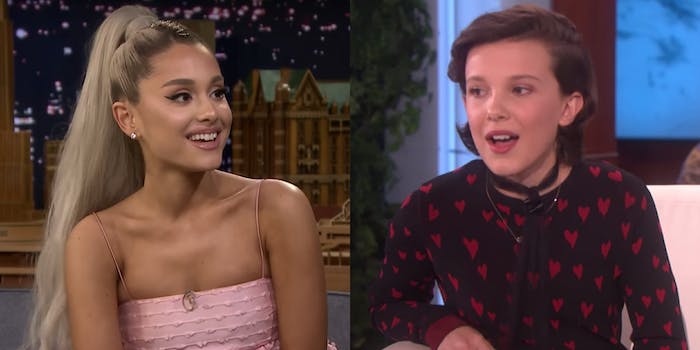 Ariana Grande and Millie Bobby Brown have a sweet friendship—teasing and all.

The 14-year-old Stranger Things actress on Sunday posted a photo of herself sharing a kiss with her boyfriend, 15-year-old singer Jacob Sartorius. The romantic beach photo caught the attention of Grande, 24, who couldn’t help but comment on how different things were when she was their age.

“I wasn’t even allowed to leave my house til I was 20,” Grande wrote in the comments.

Ariana left a comment on @milliebbrown’s recent IG post: “i wasn’t even allowed to leave my house til I was 20” pic.twitter.com/EmaPSlRTca

Brown seems to have since deleted the photo, which Sartorius also posted and later removed from his account. Perhaps the content was a little too mature, as both teen celebs uploaded a kiss-free beach photo instead.

In October, Sartorius’ appearance on Brown’s Instagram Story sparked dating rumors. Since then, they’ve each posted romantic photos of the other, including Valentine’s Day messages.

The good-natured teasing wasn’t the first time Grande and Brown interacted on social media. Last week, Brown praised the “No Tears Left to Cry” singer for her British accent after a video surfaced of Grande imitating the young actress.

The two also exchanged text messages ahead of the Golden Globes in January, with Grande signaling her approval for the actress’ dress.

Grande has recently made headlines for a romance of her own with Saturday Night Live’s Pete Davidson. According to People, multiple sources said the two are dating but have a “very casual” relationship.