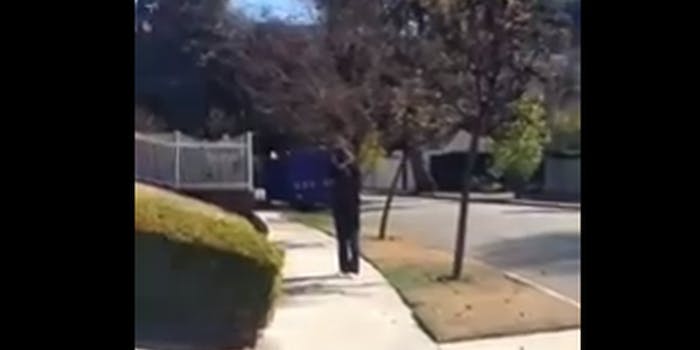 Miley Cyrus paparazzis the paparazzi on her morning walk

The pop star filmed the paparazzi snapping pictures of her as she walked her dogs.

Apparently, the difference between a stalker and the paparazzi is that stalkers harass ordinary people, whereas paparazzi stick to celebrities.

This week, Miley Cyrus gave the Internet a horrifying view of paparazzo behavior when she posted video of a creepy-looking older gentleman who (according to Cyrus’ commentary) parked in a handicapped spot before jumping out of his car and repeatedly running a few yards ahead to photograph Cyrus as she and her fiance walked her dogs through a residential neighborhood.

Cyrus originally posted the video to her Pheed account with the following introduction:

“In reply to the photos of me attempting to take my dogs on a walk while a man I’ve never seen before harassed me… All for your entertainment I suppose. Hope this is enlightening. Not to mention he was driving around in a “handicap” vehicle recklessly while I walk in a neighborhood full of children praying he doesn’t hit a small child or one of my dogs… Lost 2 already this year, don’t wanna go through that again.”

Cyrus’ exasperation with the paparazzi is nothing new; earlier this month she tweeted in support of Justin Bieber, after a would-be photographer died in a car accident while trying to snap candid pictures of Bieber.

“Isn’t it fun, being filmed while you’re on a walk?” Cyrus sarcastically says inn the video. “Never seen this middle-aged man before in my life. If you’re any other 20-year-old woman and you’re on a walk, and this sketchy—”

The video, and Cyrus’s commentary, cut off there.

Though originally uploaded to her Pheed account, the was re-posted many times on YouTube, mainly by those sympathetic to Cyrus.

“Imagine if any other middle aged creep was running along in front of a 20 year old girl taking creepy pics like this!” wrote a commenter on one such YouTube reposting. “The cops would be called immediately.”