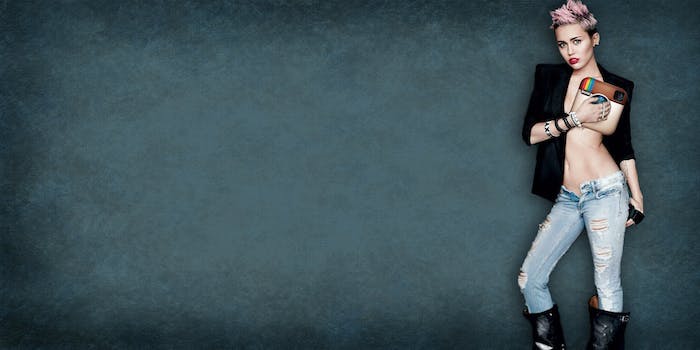 Nude Miley Cyrus to world: ‘Stay fun or be lame’

Cyrus has found a way to truly harness the power of Instagram.

Miley Cyrus’s Instagram has become an art project of sorts, as she’s used various digital flair to limbo under the site’s flimsy no-nudity rules. And she went tits out this week.

Cyrus, who is set to host the VMAs at the end of the month, posted a series of #FreeTheNipple-friendly photos documenting what she’s doing on her summer vacation, and she revealed her #turntmermaid persona.

Yes, this could (and will be) framed as “Oh, Miley’s naked again,” and there are those who wonder if her nudity is truly empowerment, which is valid. But what’s kind of remarkable is that as much as Cyrus has railed against Instagram’s policies, she’s turned the gaze outward somewhat: She’s harnessed the platform to spotlight the lives and stories of transgender and genderqueer individuals, via her #Instapride project, and to challenge ideas about beauty and sexuality. Her revolution might not be a wave, but it’s at least a ripple.

There are many women attempting to “free” their nipples in the name of equality, but Cyrus found a way to wield the power of a social media platform on her terms. And so we keep looking at her.

In a month where issues with white feminism have been writ large, it’s easy to zoom in on Cyrus and rip her apart for being too this or not enough of that. (Or to shame her for being skinny, as many commenters have.) But perhaps there’s insight in zooming out.

Stay fun or be lame.