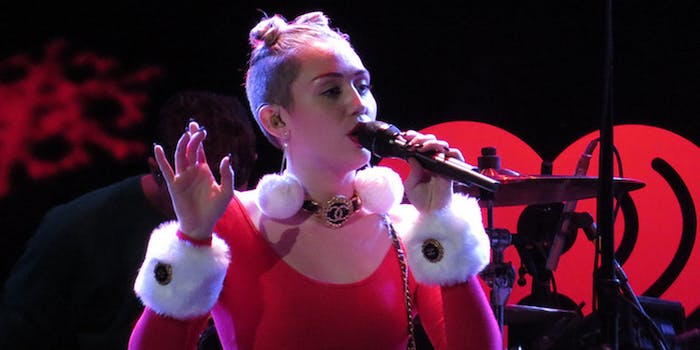 Kathleen Hanna reaches out to Miley Cyrus about an album collaboration

Last week, Miley Cyrus posted two photos of Kathleen Hanna, former singer of Bikini Kill and Le Tigre, currently of the Julie Ruin. The photos are both from the early ‘90s, when Bikini Kill was the face of the Riot Grrrl movement.

Yesterday, Hanna reached out to Cyrus about collaborating on an album, and the Internet essentially shut down.

Hey @MileyCyrus so sweet you posted pics of me…have an idea for an album that only you are daring enough to make .

Cyrus was born in 1992, and around this time, the Riot Grrrl movement was starting to circulate outside of hubs like Olympia, Wash.; Portland, Ore.; and Washington, D.C. Bikini Kill, Hole, and Sleater-Kinney were a few of the more high-profile names to emerge from the movement, which was deeply tied into feminism and zines and which pushed back against a culture of harassment, rape, and domestic abuse. Bikini Kill, and Hanna in particular, became the face of the movement. Songs like “Suck My Left One” are still timeless.

Last year, The Punk Singer, a documentary on Hanna’s Riot Grrrl days, her transition into making music with Le Tigre and the Julie Ruin, and her struggle with Lyme disease, was released. This put her story, and Riot Grrrl’s history, in front of younger eyes that might not have known the movement existed. Pussy Riot’s done the same.

Is Cyrus finally discovering Riot Grrrl’s past and figuring it in to her own aesthetic? She’s certainly made an effort to shed her Hannah Montana persona and found a variety of ways to keep the Miley brand in the news. And, as Pitchfork points out, this collaboration could easily be called Kathleen Hannah Montana.

In an interview with Tiny Mix Tapes last year, Hanna was asked about Cyrus’s admission of feminism in interviews:

Well, I’m glad the word ‘feminist’ is being talked about and that influential pop stars are bringing up this conversation. If she says she’s a feminist, then who I am to stop her? I’m not the feminist police. I don’t get to determine that. I’m happy that young women are embracing that term, for whatever reason it means to them.

More on this collaboration as we hear it. Meanwhile, The Punk Singer is currently on Netflix, so go watch it.