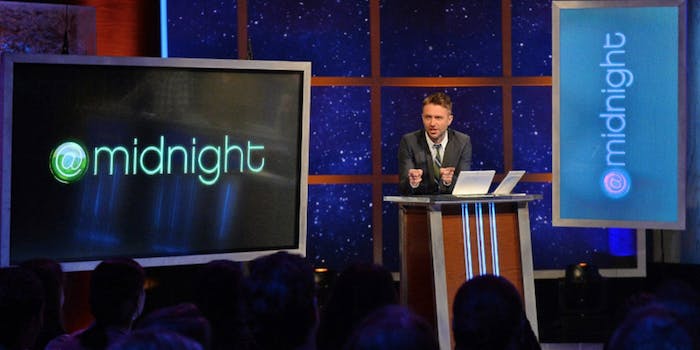 There was a lot of vaping at the ‘@midnight’ Periscope taping

In October, @midnight host Chris Hardwick and friends led a 24-hour Periscope reading of Moby-Dick. It was a feat of endurance, to be sure, but also an experiment in engagement.

And last night in Austin, Texas, on the first night of SXSW, @midnight became the first late-night show to stream an entire episode on Periscope.

The Twitter-based livestreaming app has been used for more mundane activities, but as alternate channel for TV-watching, it’s a natural extension of live-tweeting. “@midnight always had a huge fanbase on Twitter [with its segment] Hashtag Wars,” said Walter Levitt, Comedy Central’s chief marketing officer—so it was a natural transition. The @midnight account has more than 85,000 followers and over a million hearts. Hardwick is very active there too.

Ricky I use your shaver to… (do you even want to know what happens here?) 😖 https://t.co/oX1WXEL8lL #AtMidnightLive

In addition to engagement—the show’s stream was full at one point—Periscope offers broadcasters more illuminating metrics, including retention, total viewers, time watched, and duration, and it could change how broadcasters communicate with audiences.