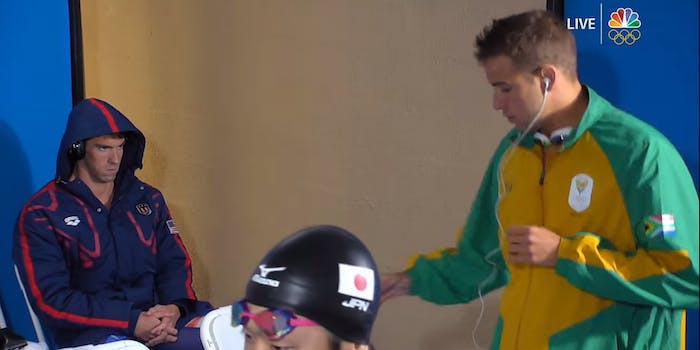 Michael Phelps was listening to Future when he made #PhelpsFace

'Gotta keep that heat on the scene ever since.'

When Michael Phelps took over the Rio Olympics this month with a venomous, hyped-up glare that instantly became known internationally as “Phelps Face,” he also left everyone wondering: What song could be powerful enough to evoke such visceral, lion-roar disdain toward South African rival Chad Le Clos? After all, he was buried in his hoodie, headphones blaring.

Sunday night at the MTV Video Music Awards, Phelps introduced Atlanta rapper Future—and told the world that during the infamous moment, he was bumping “Stick Talk.”

The Phelps reveal sparked more than 33,000 tweets in its immediate aftermath Sunday night. Featured on the rapper’s 2015 record DS2, “Stick Talk” is a chaotic, brilliant song about guns, street violence, and hanging out with your bros… who are wielding guns.

Now it’s forever linked to one of sport’s crankiest faces.

You can stream the VMAs Sunday night over at MTV.com.