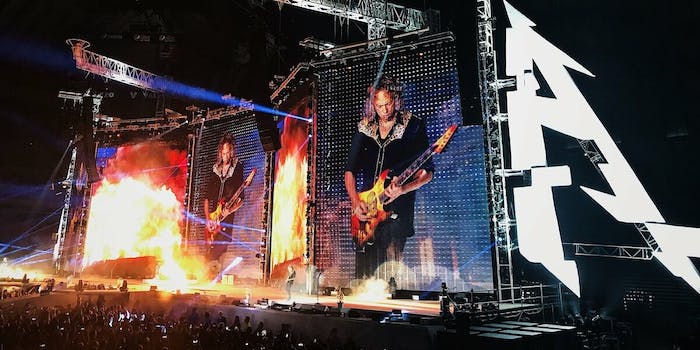 The enduring cult of Metallica

Metallica's WorldWired Tour proves it's still the most vital metal band on the planet.

Metallica will never commit a sin too grievous for its fans to forgive.

Sure, the rock legends have tried. They abandoned the breakneck thrash that made them kings of the Bay Area metal scene on 1991’s hard-rocking Black Album, which subsequently became the bestselling album of the Nielsen SoundScan era. They sued Napster for copyright infringement in 2000 after discovering a demo of “I Disappear” on the file-sharing site, ruining the fun for head-banging teenagers everywhere. They performed on the Grammys with Lady Gaga (and a broken microphone). They chopped off all their hair. They made Lulu.

And yet these past iniquities melt away as soon as the band flicks on its Marshall amps.

That’s because Metallica does not inspire casual fandom. Listeners enter into a social contract in which they pledge to love the band unironically, in sickness and in health, until the end of time. Like a delinquent husband, Metallica will go missing for extended periods, say things they don’t mean in public, and pull some cockamamie schemes to make a quick buck. But eventually, they’ll make up for it by delivering an earth-shattering, two-hour marathon performance of hits and deep cuts, such as on 2017’s WorldWired Tour, which proves this remains the greatest and most important metal band alive.

“If you want to live forever, then first you must die!” frontman James Hetfield roared Wednesday night at the Alamodome in San Antonio, before slicing into the serpentine riff of “Now that We’re Dead,” off November’s Hardwired… to Self-Destruct, the group’s first proper studio album in eight years and sixth consecutive chart-topper. Such platitudes become prophecy when barked by the militaristic rhythm guitarist, as Metallica have continually cheated death and stuck a defiant middle finger to the concept of aging gracefully.

I’m not just talking about the obvious, literal instances, such as the band’s decision to soldier on after the tragic bus accident death of bassist Cliff Burton in 1986. I’m talking about the myriad of baffling career moves over the decades: recording a live album with the San Francisco Symphony; dedicating 30 seconds of the Some Kind of Monster DVD to drummer Lars Ulrich’s profane, monosyllabic tirades; that paparazzi picture of Hetfield carrying an Armani shopping bag and wearing plaid shorts and flip-flops, inspiring waves of archaic memes; releasing commemorative Funko figures this summer.

Such actions could’ve meant career suicide for a lesser band. But that’s the beauty of Metallica fans: We don’t give a shit about cynics from every corner of the internet decrying the group as tragically unhip. When Metallica releases an album or visits our town once per decade, we immediately download the songs to Spotify and make our pilgrimages to the nearest stadium so we can be baptized by fire and palm-muted riffs, our absolution for listening to Bruno Mars and Coldplay on repeat. And yes, I say “we,” because in the cult of Metallica, diehard fandom outweighs even the noblest attempts at journalistic objectivity.

The band members know this, and they reward us for our patience. Although the first half of the Alamodome show sagged slightly under the weight of five new songs, the foursome redeemed the second act by burning through a whirlwind of its finest ’80s cuts, from Kill ‘Em All thrashers “The Four Horsemen” and “Seek & Destroy” to … And Justice for All’s haunting war ballad, “One.” Cannons of fire erupted from both sides of the stage as Ulrich played the most iconic double-bass pattern in the history of rock drumming. Giant balloons emblazoned with the band’s logo exploded, releasing a flurry of fireworks that were quickly drowned out by the audience’s rapturous applause.

These moments confirm what staunch rock scholars have long tried to deny but must now confront head-on: Metallica has snatched the mantle previously held by Led Zeppelin for the most megalithic hard rock band on the planet. Guns N’ Roses put up an admirable fight on its current reunion jaunt, but until Izzy Stradlin and Steven Adler rejoin the fold and record another knockout album, the group is stuck in nostalgia mode. U2 reaches transcendent and politically charged heights on its ongoing Joshua Tree tour, but the music obviously lacks the sonic gut punch that inspired thousands of teens and parents to hurl their bodies into each other at the Alamodome.

The members of Metallica—Hetfield, Ulrich, lead shredder Kirk Hammett, and bassist Rob Trujillo—wield their songs like a 10-ton hammer of justice, obliterating fans’ former grudges and preconceived notions. They do not repent for past mistakes or painful absences; they simply unleash one million screaming watts upon their audience and say, “Fuck you, we are Metallica.”

Yet for all the thundering riffs and blinding pyrotechnics, Metallica has endured for 35 years because it never forgot how to meet fans on their level. Hetfield dropped to his knees at the end of a soaring, cathartic rendition of “Fade to Black” and held his guitar over the lip of the stage, grinning as he let members of the audience strum with glee. He joined Ulrich on the drum riser and banged his head furiously during blistering deep cut “Fight Fire with Fire,” as Hammett flashed him an exasperated look that said, “What the hell are we doing still playing these songs in our 50s?”

In these moments, the gargantuan rock stars proved that they sweat and scream and grit their teeth with the rest of us as they power through their timeless anthems. If the titanic, gleeful, and ultimately inclusive WorldWired Tour proves anything, it’s that Metallica can’t—and won’t—slow down.

“We don’t give a shit about where you come from, what you’ve done in the past, what color you are, what religion you believe, what food you do or don’t eat,” Hetfield told the Alamodome during one of the evening’s most poignant moments. “The fact is, we care about you who are here celebrating the night together, and you are Metallica’s family.”