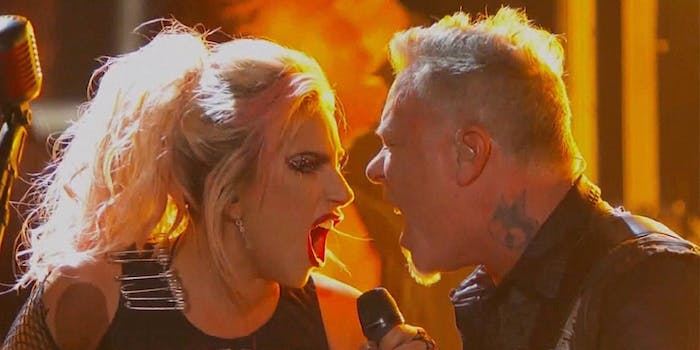 It should have been a match made in heaven and hell.

Metallica, gods of metal, joined by Lady Gaga, the goddess of pop who brought much-needed rock influences back into a genre that needed bite. But from the moment they were introduced Sunday at the Grammys, things went south.

First Laverne Cox didn’t say Metallica’s name during the introduction. The band was unfazed, storming the flame-covered stage, and raising hell with new single “Moth Into Flame.” Thirty-six years in, Metallica was playing new music at the Grammys—if only James Hetfield’s microphone was working.

Gaga’s vocals rang out loud and clear, but every time the camera went back to Hetfield, you simply saw a man singing his heart out into the void. Always the consummate professional, Hetfield simply walked over to Gaga’s microphone to sing without missing a beat.

Afterward, he was visibly upset.

While the microphone situation was awful, Metallica sounded better than ever—tight and energized. If your vocals aren’t going to work it’s good to have a backing band that plays like they’re running from the devil. But it was too late: Twitter weighed in, and fans were not happy.

Me before & after watching Lady Gaga perform with Metallica. #GRAMMYs pic.twitter.com/hFJAbWpL4L

And the vitriol just kept on…