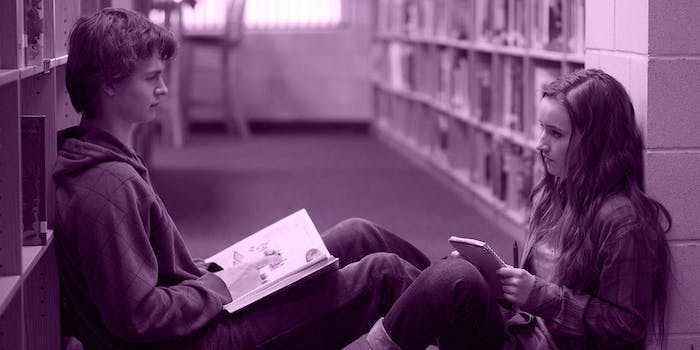 The future of film marketing isn’t a shout but a whisper.

“Discover how little you know about the people you know.” Those are the enigmatic words cut between the frames of the trailer for Jason Reitman’s latest film, Men, Women & Children. But to those familiar with Whisper, the tagline might sound more like a fitting description of the secret-sharing app rather than a drama based on the seedy digital lives of suburban families. In part, that’s what drew the two projects together in the first place.

“We started to see in Men, Women & Children that themes involved in the film really resonated with themes we were seeing people discuss on the platform,” Megan Wahtera, senior vice president of interactive marketing at Paramount Pictures, told the Daily Dot. Having tracked Whisper since its inception in March 2012, Wahtera was intrigued by the digital confession booth the app offered its users and what conversations those confessions led to. “We really just felt there was an organic alignment between the film and what people were talking about from a natural standpoint across Whisper,” Wahtera said.

The Venice, Calif.-based app allows users to voice their deepest thoughts, darkest deeds, and astonishing admissions in white block letters against corresponding imagery, ostensibly without fear of repercussions—though Whisper users may have cause to question some of the app’s claims about anonymity. After breaking the news of the split between Chris Martin and Gwyneth Paltrow earlier this year, the app gained legitimacy as not only a news source, but also a purveyor of pop-culture trends. Soon after, brands began to flock.

“We’re pretty selective about how we choose our partnerships,” Whisper’s director of business development, Jay Rockman, told the Daily Dot. “We wanna make sure that any brand we expose our audience to makes sense for them.” But after reviewing the film, the company found the film’s message a natural fit with the subjects Whisper users were already discussing. “It’s definitely about technology and relationships; it’s something that’s very central to Whisper,” Rockman said.

With a track record of successful media partnerships that include the film Endless Love, Hulu’s Deadbeat, MTV’s Virgin Territory, and VH1’s Couples Therapy, the app has mastered integrating branded content into its streams without alienating users. Unlike Instagram’s upsetting attempts at weaving sponsored content into feeds, the Whisper team’s understanding of its audience helps distill a project’s message into questions for reply and discussion.

“It’s not marketing in a way that it would just be talent-driven; it’s definitely something that works as a moment in life,” Wahtera mused. In early September, the app began rolling out a dozen featured posts, each illustrated with imagery from the film. The 12 prompts were varied, with questions ranging from tame (“One thing you miss about school?”) to incendiary (“When is it okay to cheat?”). Yet, the most successful Whisper of the campaign was the simplest, with the post asking users “What song describes your life right now?”

With tens of thousands of original pieces of content created and Paramount reporting 120 million impressions from the campaign, both parties were pleasantly surprised with the resounding success the partnership generated. “We’ve seen the most success of any of our partnerships,” Rockman beamed over the phone. As the film moves to wide release this weekend, Paramount is hoping that that engagement will translate offline into box office dollars.

That’s kind of our philosophy, to always reach people where they’re heavily engaging with the content versus instead of just pushing marketing messages on them—just trying to look at the trends and look at what people do and reach them there.

With so many streaming options available and video-on-demand releases showing no signs of slowing, studios have to fight harder to fill seats in a theater. But by recognizing its increasingly digital audience, Paramount has hopefully identified a marketing philosophy and that just might keep the Hollywood behemoth ahead of the curve.