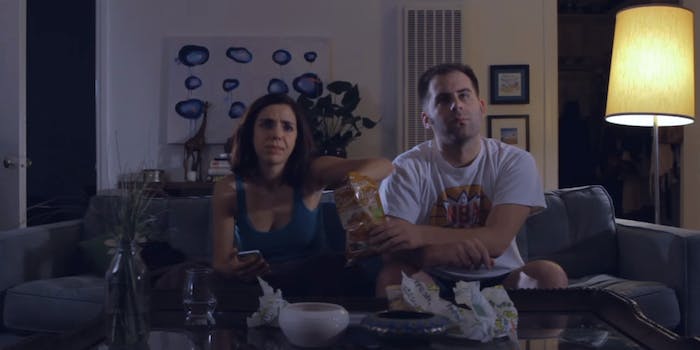 Megan Rosati unleashes ’52 Ways to Break Up,’ one crippling reality at a time

Who doesn't love a good breakup?

If you’re anything like me, there’s only one way to put an end to an unwanted relationship: by gradually become more and more withdrawn until the other party does the legwork for you. But apparently not everyone is as emotionally withholding, and if you’re one of these fully functioning people, then you may just see a bit of yourself in 52 Ways to Break Up.

It’s a cute premise—52 weekly chunks of relationship failure, all starring the webseries’ creator, Megan Rosati. Sure, the sheer number of projected episodes seems a little audacious in the face of the likely unsustainability of its narrow topic, but the five episodes so far (a new one hits the channel today) have been varied enough to set that concern aside for the time being.

And who doesn’t love a breakup? Not your own of course, but that of strangers. There’s a reason why people love those people-are-breaking-up-at-the-table-next-to-me livetweets and text exchanges, even though to anyone but the worryingly credulous they are obviously fake. It’s a glimpse behind closed doors, the big opportunity for a public airing of disconcerting traits that have been ironed out of public personas.

52 Ways to Break Up lacks the salaciousness of a fight in a restaurant. It is, after all, fictional. Indeed the admission that none of the breakups are inspired by reality robs us of the grim intrigue that each episode has been lifted in toto from Rosati’s life. But acting or not, there is still plenty to identify with here. Chances are you’re going to be in a relationship that ends. And while it probably won’t happen in a café with someone tweeting beside you, it will likely play out like one of Rosati’s episodes.