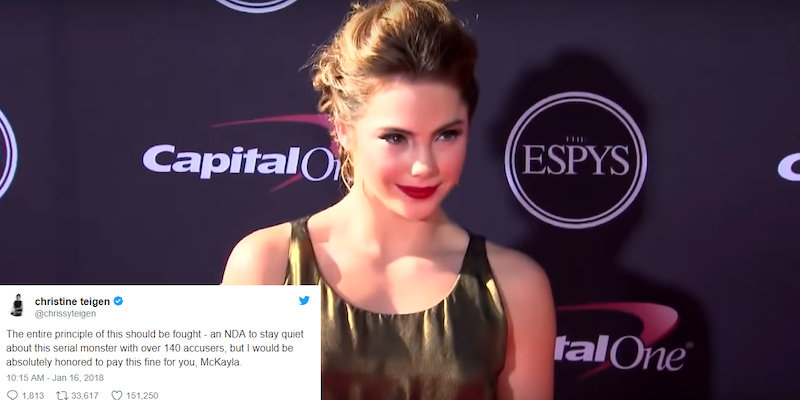 Speaking out against Dr. Larry Nassar could prove expensive.

McKayla Maroney knows that Dr. Larry Nassar is a serial abuser who has preyed on young athletes, as the U.S. gymnast is one of 140 who say he has sexually abused them. Unfortunately, that’s all she can tell us.

Chrissy Teigen wants to change that.

Maroney is bound by a non-disclosure agreement with USA Gymnastics, the U.S. Olympic Committee, and Michigan State University to stay quiet on the details as part of a $1.5 million settlement she received in 2016 for coming forward. She faces a $100,000 fine for revealing them. But as Nassar is set to face stories from many of his victims this week, Teigen says she’ll happily cover the legal cost of justice and truth for Maroney to speak out at his sentencing. The disgraced doctor has pleaded guilty and faces seven counts of sexual misconduct.

“The entire principle of this should be fought—an NDA to stay quiet about this serial monster with over 140 accusers, but I would be absolutely honored to pay this fine for you, McKayla,” Teigen tweeted on Tuesday.

The entire principle of this should be fought – an NDA to stay quiet about this serial monster with over 140 accusers, but I would be absolutely honored to pay this fine for you, McKayla. pic.twitter.com/lsBEgEqZpD

Maroney’s gymnastics teammate Simone Biles came forward on Monday to add her name to the list of athletes sexually abused by Nassar.

“This behavior is completely unacceptable, disgusting, and abusive, especially coming from someone whom I was TOLD to trust,” she wrote.

Aly Raisman, another Olympics standout who became a star in London 2012, said facing Nassar in court would be too traumatic. The doctor faces life in prison.