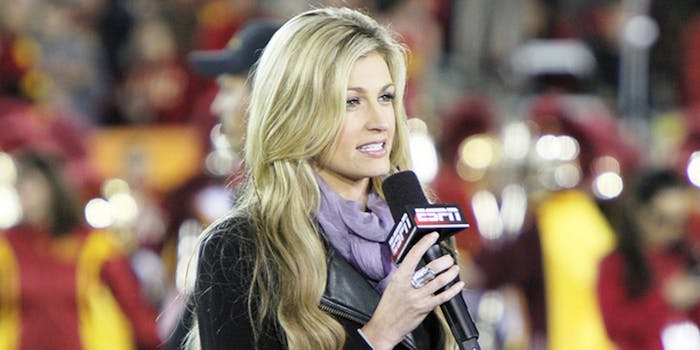 A piece of advice: Don't mock Marshall Henderson about drug past.

Marshall Henderson didn’t have to pull a DeMarcus Cousins and wait five long years before extracting his Twitter revenge. In the case of the former Ole Miss basketball star, it only took two years before he could tweet the perfect “gotcha” joke to his former perceived tormentor, TV sports reporter Erin Andrews.

Here’s the backstory: Henderson had drug problems during his time in college, failing multiple tests despite becoming one of the best players in the Southeastern Conference. He was, in fact, a good enough player to perform professionally in Italy, Qatar, and Iraq. But the positive drug tests led to suspensions while he was at Ole Miss, and that caught the attention of Andrews, who tweeted this in 2013.

He mocking anyone now? RT @GaryParrishCBS: Marshall Henderson's suspension is related to a failed drug test, a source told @CBSSports.

That tweet got the attention of the outspoken Henderson, who immediately put the slight into his memory vault.

Two years later, Henderson was ready to strike when Los Angeles Kings forward Jarret Stoll, who happens to be Andrews’ boyfriend, was arrested and charged with cocaine possession late last week, Henderson took to Twitter to make good on his promise.

Is the joke mean-spirited? Absolutely. But the fact that Henderson pulled his stunt in the early-morning hours of 4/20 makes the whole thing, well, kinda perfect.