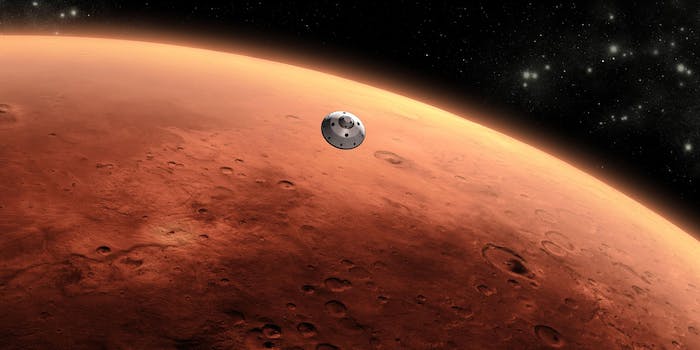 In yet more news of science fiction meeting real life, there’s going to be a reality TV show about a manned journey to Mars.

If you think that sounds like a weird decision for NASA (or any other country’s space exploration program) to make, then you’d be right. The Mars One project is run by a private company, led by Dutch billionaire entrepreneur Bas Lansdorp.

The search for potential Mars astronauts began last year, with the caveat that it will be a one-way journey. From a pool of over 200,000 candidates, 705 have been chosen to go through a rigorous training and selection process so Mars One can pick the right team for the task.

Deadline revealed on Monday that this process will be made into a reality TV show, created by DSP, a production company that has previously made documentaries for National Geographic,  the Discovery Channel, and the BBC. The series will start in 2015, as the 705 candidates are whittled down to the four who will actually end up going to Mars.

Explaining his desire to connect Mars One with a reality show, Bas Lansdorp said:

“Our team felt all along that we needed a partner whose strength lies in factual storytelling to an international audience.  DSP will provide that to Mars One, while allowing our selection committee to maintain control of the applicant selection process.”

In other words, it’s going to be less Jersey Shore and more Cosmos.

Mars One’s first unmanned mission is scheduled to set off in 2018, with the first team of astronauts following in 2025. That means that whoever gets through next year’s televised selection process will have to wait the best part of a decade before they’re actually on their way to another planet.