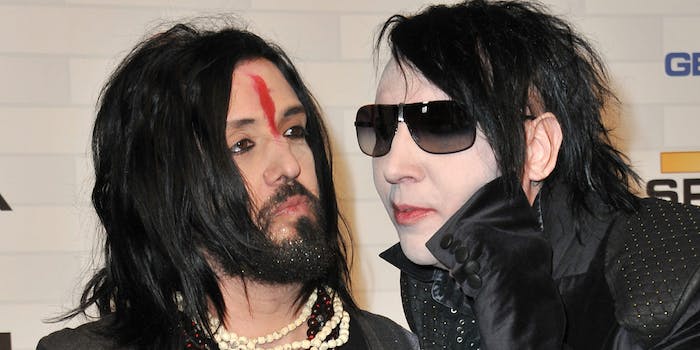 Marilyn Manson has “decided to part ways” with longtime bassist Jeordie White (aka Twiggy Ramirez) after allegations of rape and domestic abuse surfaced.

I have decided to part ways with Jeordie White as a member of Marilyn Manson. He will be replaced for the upcoming tour. I wish him well.

Last week Jessicka Addams, of the South Florida punk band Jack Off Jill, detailed allegations of rape and abuse against White, whom she dated in the ’90s. In a Facebook post she claimed White verbally, physically, and sexually abused her over the course of their relationship. Addams also claimed that Jack Off Jill’s label advised her not to go public with the allegations. She vaguely referenced the allegations in a 2015 interview.

“For women to own our power we must stand up for each other,” she wrote. “It’s the only way we can confront and combat men who think they hold power over us. I am thankful to know that there are men out there who do not share this gross ideology and stand with us. This is an intersectional uphill battle for women and the men who are scared for their reputation with other men to defend us.”

White has not responded to the allegations but last week Manson said in a statement: “I knew Jessicka and Jeordie had a romantic relationship many years ago and I considered and still consider Jessicka to be a friend. I knew nothing about these allegations until very recently and am saddened by Jessicka’s obvious distress.”

Update 12:09pm CT, Oct. 26: White has released a statement regarding the allegations: “I have only recently been made aware of these allegations from over 20 years ago. I do not condone non-consensual sex of any kind. I will be taking some time to spend with my family and focus on maintaining my several years of sobriety. If I have caused anyone pain I apologize and truly regret it.”