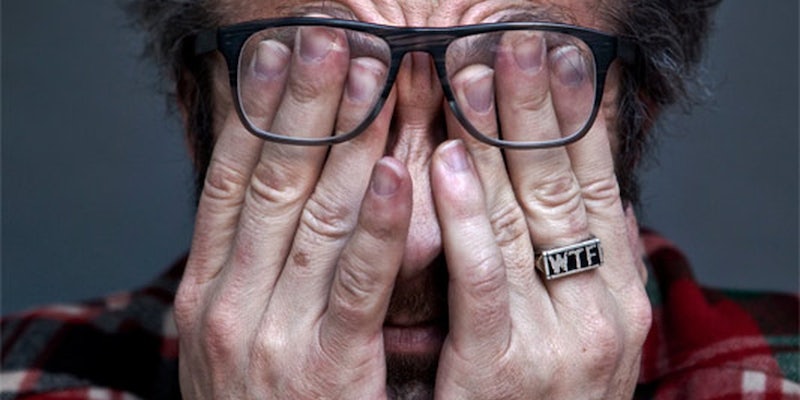 Last month Personal Audio filed lawsuits against three of the biggest podcasting companies, a move that could have a significant impact on the future of the medium.

It’s not a wise decision to make Marc Maron mad.

The comedian turned podcasting superstar has a reputation as “the angry comic.” On his podcast, WTF with Marc Maron, he’ll recount vicious takedowns that brought comedy hecklers to tears. He’ll rage against Twitter trolls who try and bait him into confrontation. And if Gallagher is ever involved, things can get really ugly. Yet anyone who listens to the show regularly knows he’s changing. The success of the podcast has made him a national headliner and resulted in a forthcoming show on IFC, resulting in a more diplomatic outlook on life.

That’s why it was so surprising to listeners last week when Maron broke from his usual intro to unleash that old anger. But this time, the target of the comedian’s diatribe wasn’t a heckler, rival comic, or even a dickish Twitter follower. It was a patent troll.

Maron, like many other podcasters, has recently come under attack from a company called Personal Audio, which owns the patent to a certain technology it says many podcasters are infringing upon.

“It’s a frightening world that someone can extort money from guys working out of their garages and basements,” Maron told the Daily Dot. “It’s predatory and coercive. It’s extortion that comes out of nowhere. It’s a shakedown of a bunch of guys who can’t defend themselves.”

Last month Personal Audio filed lawsuits against three of the biggest podcasting companies: How Stuff Works, TogiEntertainment, Inc., and ACE Broadcasting, which produces the Adam Carolla Show and other podcasts. Smaller podcasters, like Maron, also received letters from Personal Audio inviting them to license the patent for a fee. It’s a move that Maron likened to a mafia-style protection racket.

“We’re just guys talking on microphones out of our garage,” he said, “then someone comes out of nowhere and says we owe them money.”

“The average cost of a patent defense, from what I can tell, is about $2.5 million. None of us have that,” echoed Jessie Thorn of the Maximum Fun network. “Even the cheapest path out of this costs hundreds of thousands of dollars. It’s an existential threat to this entire industry. Because it’s very different from suing Motorola. They’re suing people whose net worth is $125,000.”

Podcasters are just the latest sector of the tech industry to come under attack from patent trolls, a derisive term coined to describe companies like Personal Audio whose revenue comes from holding patents and pursuing litigation, not actually producing or marketing a product. According to NPR’s This American Life, patent trolls have plagued other app developers and Silicon Valley startups for years. The high cost of litigation forces many defendants to settle out of court, while others are coerced into licensing agreements that patent holders ensure will protect the companies from legal action.

Patents, of course, need to exist to protect the owners of truly unique ideas. But David Martin, a patent quality analyst for M-CAM, told This American Life that many of the patents issue for technology over the past several decades have been redundant:

“We thought that would be an anomaly. And then we were told, ‘Oh no, it’s not an anomaly. That happens.’ So that’s what got us into the rabbit hole you’re about to see. Which is to say, well, ‘Let’s see how many times that happens.’ And as I’ve testified in Congress, that happens about 30 percent of the time in U.S. patents.”

In other words, according to Martin, a third of all patents being issued aren’t for new ideas.

The impact of patent trolling costs a lot more than just money. Daniel Nazer of the Electronic Frontier Foundation said the patent issue is starting to stifle enire industries.

“We think that the patent system—with the flood of software patents and the rise of patent trolls—has become a tax on innovation,” Nazer told the Daily Dot. “And patent trolls are increasingly targeting smaller companies, like startups and app developers. These are the innovators and tinkerers that EFF wants to stand up for.” 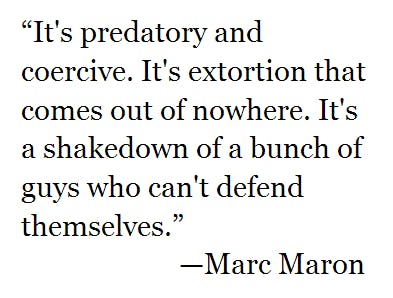 Of course, Personal Audio doesn’t see itself this way. Founded as an LLC in 2009 by James Logan and Charles Call, the firm is officially headquartered in East Texas, which has become ground zero for patent lawsuits since the federal courts there are less clogged with precedence-taking criminal cases. It is the successor to Personal Audio, Inc., which was founded in 1996, the same year it filed a patent application for technology it said is critical to the transmission of MP3 files to personal audio devices.

A statement from the company is vague about the details of the specific technology to which the company claims to own the rights. However, the company was successful in winning an $8 million jury award from Apple in 2011. Personal Audio was also able to enter into licensing agreement with Sirius, Motorola, Samsung, Archos, Coby, RIM, and Amazon after suing the companies for patents related to downloadable playlists.

This record of successful litigation and obtaining licensing agreements is a frightening prospect for Maron and other podcasters. That’s why he’s come out on his show as a vocal proponent of recently introduced legislation aimed at curbing the issue.

Last month, Representatives Peter DeFazio (D-OR) and Jason Chaffetz (R-UT) cosponsored the SHIELD Act, which would require those bringing patent lawsuits to court to pay all the defendant’s legal costs if they are unable to prove patent infringement. Unlike an earlier version of the bill, the SHIELD Act would apply to all industries.

“Patent trolls drained an estimated $29 billion from American innovators and companies in 2011,” DeFazio said at a news conference introducing the bill. “They pad their pockets by buying patents on products they didn’t create and then suing companies from every industry for infringement. These egregious lawsuits have spread to nearly every sector of the economy, costing billions of dollars and countless jobs.”

Supporters like Nazer say the SHIELD Act is a good first step but that further reforms are needed. The EFF has proposed additional reforms such as shorter patent terms for software and penalty caps. Nazer also said there should be an “independent development defense,” for instances where a tech developer stumbles upon patent-protected area while working independently.

“Too many patents are granted on small improvements that are quickly, and independently, developed by others,” he said. “This is especially true of software-related patents. But if you didn’t copy the patent, why should you pay damages? The patent owner has contributed nothing to your success.”

More than 11,000 supporters have already signed on in support of SHIELD Act through the EFF website. But in terms of the national dialogue, that’s still far from the mainstream. That’s why Maron said he’ll continue to do his part, along with other podcasters, to bring more attention to the issue.

“This issue is just not real to most people,” Maron said. “But it’s very real to folks in the tech industry who’ve been destroyed by patent trolls. Their business model means putting podcasters out of business.”