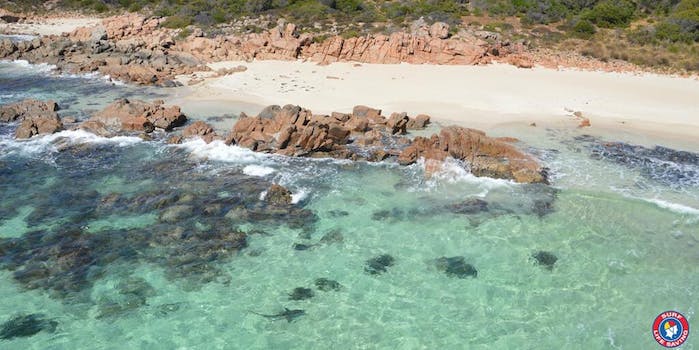 Tweeting sharks warn Australians to GTFO of the water

The thing about sharks is that even when they’re right next to you, you often don’t know until it’s too late. But a new Australian effort to protect beaches from nearby sharks allows tagged sharks to transmit sonar signals to a special Twitter feed when they get near the shore.

So far scientists have tagged 320 sharks under the monitoring program. As those sharks approach the beach, their sonar device relays a signal to beacons along the shore, which then instantly sends a tweet to swimmers and surfers via Twitter feed @SLSWA, warning them that there’s a shark in their area:

Mullaloo patrol has closed the beach due to the shark receiver detecting a tagged shark repeatedly in the area.

Western Australia is full of beautiful spots that lure surfers into the water each year. Unfortunately, they also lure sharks, a potent combination that has made the Australian state one of the deadliest regions in the world for shark attacks. More than six people have been killed there in the last two years.

Surf Life Saving—the Australian equivalent of the community volunteer fire department—has worked with the Western Australian government for years to patrol the beaches with helicopters and doing beach shutdowns when sharks are spotted.

But it’s intense work to keep an eye on Australia’s miles of coastline: Yesterday while the rest of us were taking a holiday and eating Christmas pudding, this was happening on the beach:

Lifesaving services have concluded for the day, final statistics: 18 rescues, 33 first aids and 529 preventative actions on our beaches.

The alert system could be crucial to more than just people. In the wake of the November death of a surfer, Australian lawmakers recently enacted a controversial new law that allows commercial fisherman to hunt and kill sharks over three meters long if they’re spotted near surfing and swimming zones. The law lets fisherman set baited hooks on drum lines in order to catch and kill sharks, including great whites and other endangered sharks.

While the law’s proponents insist it won’t significantly affect shark populations in the area, Australian shark conservationists and environmentalists point to previous culling attempts as unsuccessful examples of shark removal efforts in the past.

And given that 100 million sharks are killed annually around the world, sharks need all the help they can get just to survive, much less swim freely.