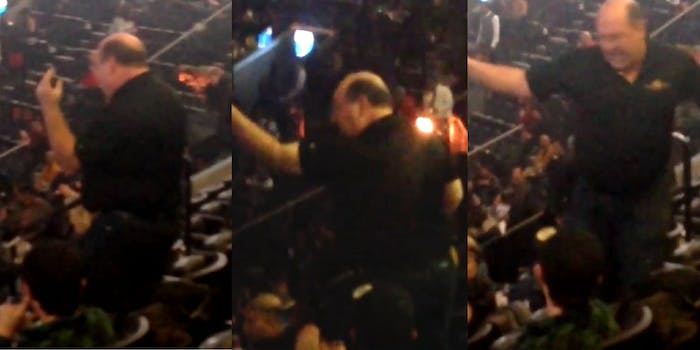 It's all for you, internet.

Dads at concerts are notorious for being stiffs, sitting down with a book light and paperback while their children dance into oblivion. But it appears one “dad” has put his book down and is embracing the rhythm himself.

Instagram user Nico Vargas-Germain this week posted a video he captured before Janet Jackson‘s performance at the Barclays Center in Brooklyn, New York. In the clip, an older white man is seriously dancing his heart out to Michael Jackson‘s “Remember the Time.” The video’s even gone viral on Twitter.

The man doesn’t just like the song. This man knows the lyrics, the timing, the choreography by heart as he mouths along with the words and grooves during the appropriate song breakdowns.

Honestly, I’m a little disappointed the crowd, after a few enthusiastic “whoo”s, didn’t continue to cheer this man on. Someone’s giving you this pre-Janet mini-Michael tribute, and you’re not the least bit excited about this genuine passion that the both of you seem to share about the Jacksons? ARE YOU NOT ENTERTAINED?

Guess it only makes sense that a Janet fan would know a wide range of Michael moves, as well. Watch the clip below:

This man was FEELING IT!!! Give it up for @lawlessunlimited and his amazing dance moves!! #JanetJackson #MichaelJackson #StateOfTheWorldTour