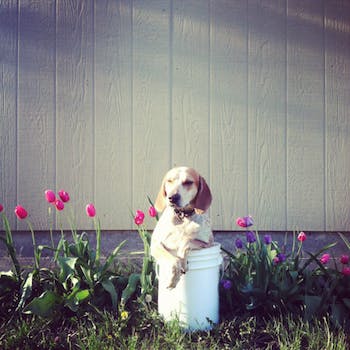 Maddie the coonhound can stand on just about anything

When Theron Humphrey figured out his coonhound Maddie could stand on anything, he started snapping photos.

On Monday, Maddie the coonhound stood perched on the back of a thoroughbred horse in Mission Hill, South Dakota. On Sunday, she nestled in between a stack of tractor tires in West Point Nebraska. A day before, she was in nearby Kennard, standing comfortably with her legs on two railroad crossing lights.

Her owner, 28-year-old freelance photographer Theron Humphrey, said Maddie’s been doing this since the day he brought her home.

“She’s always had this natural ability to stand still,” Humphrey told the Daily Dot. “We’d be hanging out with friends, and instead of laying down, she’d stand still and not move. Over time, I started picking her up and putting her on top of things.”

Humphrey has spent the past four months photographing those balancing acts for Maddie On Things, a Tumblr-based gallery that Humphrey maintains while driving around the country piecing together This Wild Idea. That’s Humphrey’s Kickstarter-funded story-a-day project that documents the lives of everyday Americans around the country. In that time, the Tumblr has become quite successful, with some posts—like the one wherein Maddie is balanced on the horse’s back—racking up more than 5,600 notes.

The Tumblr has been so successful, in fact, that Chronicle Books has agreed to publish a collection of Humphrey’s photos in a book set for release in the spring of 2013. Wild news, considering that the Tumblr started as a side project of photos Humphrey took using the Instagram app on his iPhone 4.

“It’s usually the lighting or composition or just putting Maddie up on a good object,” Humphrey said when asked what makes for a proper Maddie On Things shot. “Today, I put her up in a tree, and the tree was just cupped in the right way so that she could sit up there. The background wasn’t very distracting, so it all came together.”

It also helps that Maddie’s blessed with this innate ability to balance herself in some awfully precarious situations. Whether perched on a fire hydrant, standing atop two electrical boxes, or going paws up on four different cans of beans, Maddie has proven that no surface—be it flat as a board or round as a wheel—is beyond the realm of possibility. Humphrey says that such talents are commonplace when it comes to coonhounds.

“Those dogs are actually natural climbers,” said Humphrey. “Hunters use them to hunt mountain lions, and they’re a fearless breed of dogs. So it’s not out of character for her to find herself in these unconventional positions.”