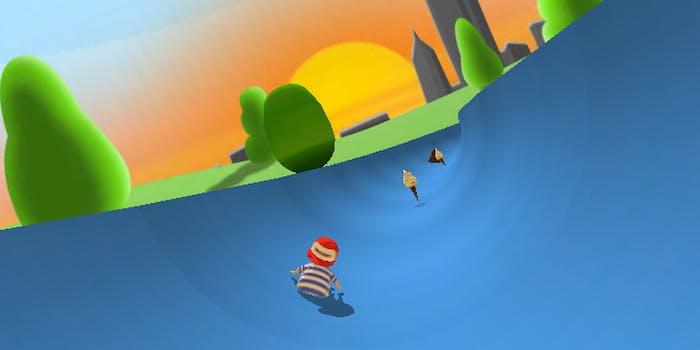 Here's a new way to get down with rapper Mac Miller.

Toke up, jam out, and now slide down with rapper Mac Miller in his new video game.

Titled Blue Slide Park: The Game, after his recently released album, the colorful game’s premise is as simple and mildly entertaining as Miller’s lyrics. The goal is to travel down a blue slide while dodging obstacles (piles of poop), collect points (ice cream, oddly enough), and see how long you can do so without falling off.

The game dropped Tuesday in tandem with the album’s worldwide release, Miller acknowledged in a YouTube video, adding that he hopes it prevents you from being bored.  While tricky to get the hang of at first, the game gets easier the more you play it. Miller jokingly bragged that he’s racked up a score of “50 million” already.

You can’t get it at the market, but it is also available on Miller’s Facebook page, and he’s encouraging fans to tweet about it using the hashtag #MacMillerGame. Its location is based off the iconic blue slide in Pittsburgh’s Frick Park.

Most tweets about the game are bragging about high scores, but one player tweeted the “games actually sick.”

I wonder what Donald Trump thinks about it.