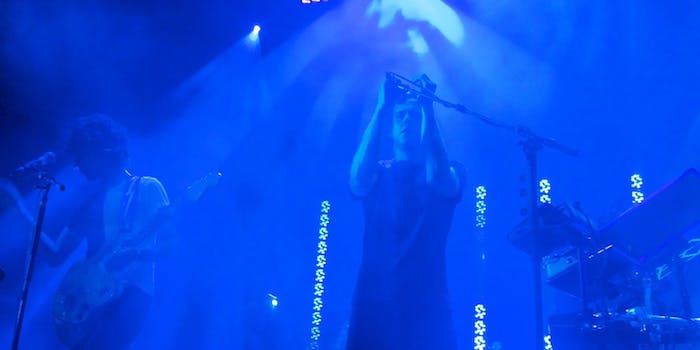 Photo via PeterTea/Flickr (CC BY ND 2.0)

M83 wants you to be the band’s new keyboard player

Have they got a deal for you.

Ladies, if you’ve ever wanted to join the band M83, you’re in luck—if you can sing and play the keyboard, that is.

M83 frontman Anthony Gonzalez has taken to the Internet in a quest to find the band’s newest member (preferably female; sorry guys). In 2011, Gonzalez successfully recruited guitarist/”part time synthetic cowbell smasher” Jordan Lawlor, who still plays with the band. “This time I am looking for a female singer who can also play keyboard to join us,” Gonzalez wrote on the online application.

Hi friends, I am looking for a female singer who can also play keyboard to join the M83 tour… *A https://t.co/sIHPX7UwpV

The new band initiate will replace former keyboardist Morgan Kibby. Aside from the talent requisite, Gonzalez is calling for someone who can hit the ground running and show up to Los Angeles in March for rehearsals. M83 begins their North American and European tour in April, playing through until August, according to the released tour dates.

Although the application remains open, it seems Twitter users already have a favorite in mind. Among the applicants include Victoria Asher, former keyboardist of Cobra Starship. Asher has received more than a handful of endorsements from netizens on Gonzalez’s tweet alone, some praising her talent as well as expressing how perfectly they think she’d fit in with the rest of the group.

@m83news I am all yours. I just applied via your link. I was in @CobraStarship till recently

@m83news @vickyt is amazing 😍 she was in the band Cobra Starship she'd be awesome for you!!

Gonzalez hasn’t announced when he’ll make his decision, but with rehearsals about a month away, it’s sure to be very soon.

Photo via PeterTea/Flickr (CC BY ND 2.0)