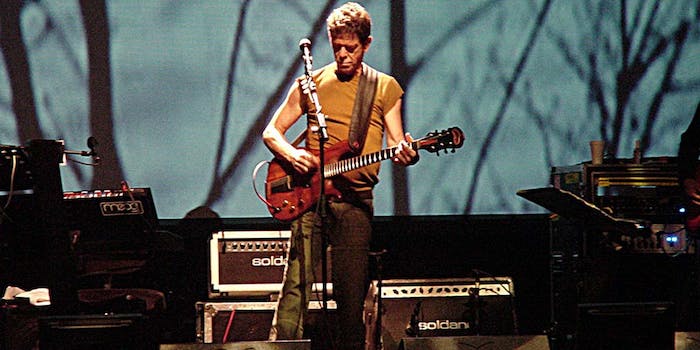 With the Velvet Underground and in his solo career, Reed changed rock forever.

Rock legend Lou Reed, whose work with the Velvet Underground and as a solo artist pushed the boundaries of rock music and defined punk and glam for generations, has died at age 71.

Rolling Stone, the first publication to break the news online, called the Velvet Underground “the most influential American rock band of all time,” largely because of Reed’s sonic and lyrical contributions.

Reed brought a poetic touch to the darker side of life in New York—what the critic Robert Christgau liked to call “the demimonde”—writing about an underworld of sadomasochism, sex, and heroin addiction. He set it to music that some critics called avant garde and others just called “noise.”

“One chord is fine,” he said. “Two chords are pushing it. Three chords and you’re into jazz.”

Although the cause of his death is currently unknown, Reed canceled several tour dates in April and flew to Cleveland for an emergency liver transplant. “I don’t think he’ll ever fully recover from this,” his wife, Laurie Anderson, told The Times at the time.

Reed is being memorialized around the Internet today—even Hacker News has taken a break from debating the pros and cons of Coffeescript to upvote his obituary to the top spot on the site—but the best online source on Lou Reed is … Lou Reed.

As he once put it, “My bullshit is worth more than other people’s diamonds.”

Reed used the music streaming service Spotify—his account was verified, and we’ll assume he was curating it himself—and kept up a playlist of songs he liked from the radio:

As well as a two-volume set called “What I’m Listening To”:

This video of Reed running through “Walk On The Wild Side,” “Heroin,” and “White Light, White Heat” at the Olympia Ballroom in Paris, circa 1973, is one of the most powerful performances you’ll find on YouTube:

You should also watch all 120 minutes of Reed’s 120 Minutes interview with an awestruck Suzanne Vega, circa 1986:

And read his brilliant Talkhouse review of Kanye West’s “Yeezus,” which Reed, a man not known for liking many things, actually liked.