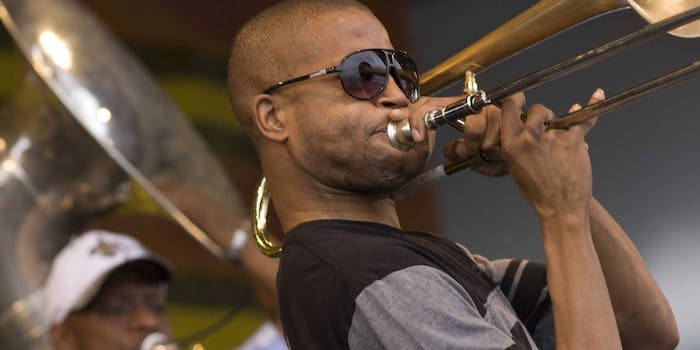 A review of Lollapalooza 2014—from someone who didn’t go

Over 300,000 patrons hit the downtown festival to see 130-plus acts positioned across eight stages. I wasn’t one of them.

Sunday afternoon during Bleachers’ ambitious but uneven Lollapalooza set, singer Jack Antonoff—decorated in wide-lens frames, cutoff black denim shorts, and a Salvation Army green jacket—quizzed his audience: “Who grew up in the ’90s?” Response was tepid, and Antonoff’s face turned disheartened. “Well, this is a song from the ’90s.” A bright, nostalgic cover of The Cranberries’ “Dreams” ensued.

The three-day festival squatted in Chicago’s Grant Park over the weekend, and the final day was rainy, mucky, and headlined by a goodie bag of for-the-kids parting gifts: Skrillex, Flosstradamus, Chance the Rapper, Childish Gambino, Kings of Leon’s entry-level troubadour grazing, the aforementioned Bleachers. Most of us old ’90s kids were home already.

Over 300,000 patrons hit the downtown festival to see 130-plus acts positioned across eight stages. I wasn’t one of them. Instead, my laptop streamed the comprehensive livefeed while I prepared lunch and ran through the in-house cleaning duties that my wife passed down.

Lolla is great because it’s the biggest American festival that is accessible by subway. With the Lake Michigan breeze, it’s consistently one of the most pleasant ways to take in a set by Phantogram. Sure, downtown Dunkin Donuts outlets turn into New Delhi train stations after a big headliner, but Lolla doesn’t leave a mark the way, say, 100-degree nights of required camping do. But as for most music fans, making the trip wasn’t a viable possibility for me this year.

Sour dads would rather build a gaudy entertainment system and watch the Cowboys at home. Reluctantly, you eventually agree that the NFL is a medium best experienced from a recliner. The modern, corporate, American festival has a similarly strong case. In May, a buddy coordinated an impromptu gathering for the OutKast Coachella reunion: speakers, a wide screen, an HDMI cable, chips, dip, and Southernplayalisticadillacmuzik. The sound popped, you watched for nuance, chemistry, and individual brilliance like a scout. Attendees enjoyed a decidedly cheaper buzz.

Live music stabilizes the soul, but ultimately, you need to be honest with yourself about what, exactly, you’re doing at a Lollapalooza. If you’re young and it’s cool, by all means enjoy before your 20s turn into your late 20s and “who all is going?” loses purpose as a condition because the answer is “maybe your one friend that writes about music semi-professionally.” If it’s a deeply personal reunion, there is no bad way to watch the Replacements. But even at festivals—even if you enjoy crowds and chalk a $7 Heineken up to the cost of business—it’s just a bunch of Jumbotrons.

The Red Bull livestream featured a scrolling sidebar overrun with earnest tweets about set times. “Who is excited for Foster the People?” was a question posed often and always with bonus topping question marks. There were three simultaneous channels, so commenters made it a running game of exclusion and self-identifying with pithy static like “Channel 2 is for REAL music fans.”

There were lots of seemingly young, bored fans in San Jose, Mexico City, and South America in the social media feed, eager to be blown away by something real.

The stream was an excuse to evaluate recurring names that you’ve heard of but never even bothered to pull up on Spotify. Trombone Shorty is 28-year-old Troy Andrews, a New Orleans-bred jazz musician that sings top-shelf soul, centerstage, between blasts of glistening trombone solos. It’s not trendy or original, but his mid-afternoon stream moved the needle because it was such a strong, unimpeachable performance—from a festival fodder brand, to boot.

“You get nothing if you don’t tour,” Perry Farrell said during one of the weekend stream’s recurring, canned interviews, “It’s the gravy. It’s the meat. It’s the potatoes.”

Titans of rap Eminem and OutKast called roll; Spoon rocked like cigarette-cool record store clerks; Lorde reigned. J Roddy Walston and the Business patched “JLR” in green electrical tape across its backline. Fitz and The Tantrums did this embarrassing and useless Eurythmics cover. Glen Hansard performed The Band’s version of Marvin Gaye’s “Baby Don’t Do It,” and it was vain and fussy. The Avett Brothers rocked like Black Crowes (talented, boring, familial). Phosphorescent singer and central composer Matthew Houck nailed an arresting arrangement of 2013’s “Song for Zula” while wearing the T-shirt of the band he’s in.

Live music is the musician’s economic foundation more than ever, and if there’s a positive to this, it’s that even snooty Pitchfork has a state-sanctioned festival. Forget AutoTune and flashing lights; bands can’t hide behind a Tumblr account and Soundcloud embed codes anymore.

We’ll find you. We found Gemini Club, a four-piece electronic pop outfit from Chicago with presence, espresso pace, and a following happy to represent in the rain (when it could instead be catching touring talent). It didn’t take long for @creepyspaghetti to ask, “What song is this?”

We found Rudimental, a band I’ve still yet to hear in any capacity but that cited Lauryn Hill and London’s rave culture as a major influence during a Red Bull interview. BBC named it the “festival band of the summer.” Put a pin in that shit. We found that, beyond a shadow of a doubt, Fitz and the Tantrums is the least interesting band working today—white-guy soul designed to keep you indifferent for three minutes. We found Warpaint’s lingeringly delicate rendering of “Love Is to Die” from its muscular studio counterpart.

GTA’s Miami sound-machine EDM saw nerdy white kids losing it while donut innertubes floated by and a guy in a hard hat expressed himself through dance. The 1975’s teen idol ’80s synthpop was made whole by post-smooth jazz sax solos. Singer Matt Healy ran late (“You can’t put the light on; these are the two best fucking songs that we have”). After he got his closing notes from the house, Healy jumped into the crowd and took selfies.

Lollapalooza has to lead festivals in “artists going into the crowd.” It’s always a strong photo opportunity and everyone loves it—win-win antics. “Today, thanks to you, we’re on the main stage,” Chromeo singer David Macklovitch toasted before returning to belting out disco lyrics about socialites and socializing. Turns out Chromeo is not my bag; ditto Airborne Toxic Event and its skinny-jean telephone rock about being a terrible boyfriend. Cut Copy had red lights and mad strobes, but its bland doppelganger is the 30-year-old synth pop once perfected by bands like Orchestral Manoeuvres in the Dark.

We found Cage the Elephant, a popular modern rock band that packed them in like McDonald’s cattle. They get the best-in-show ribbon. The Bowling Green, Ky., five-piece channeled the spirit of Jane’s Addiction and Perry Farrell best: catwalk struts, wails and flails, rowdy and rudely loud guitars, a song called “Aberdeen” that the livestream users went nuts for, and just a lot of in-one-ear-and-out-the-other liquored-up rock.

But we also found an ocean of buffering. We found that when artists flub high notes, they just abort the phrase that they are singing and yell, “Lollapalooza!” But that I missed reacting by reciprocating the yell.

“There’s a very beautiful red-headed man over there dancing his face off,” Glen Hansard said late Sunday, “I’d put $100 on you being Irish.”

Lollapalooza’s home edition is impressive in scope and result, but we found that it’s difficult to love anything as much as that red-headed patron does from a desk upstairs.