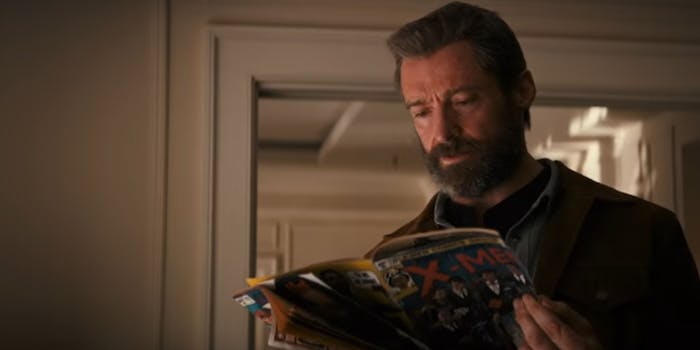 ‘Logan’ will save comic book movies from their expanded universe hell

The latest trailer for Logan, Hugh Jackman’s alleged farewell outing as the feral mutant, dropped Thursday ahead of the film’s March release. Jackman has said Logan is “not beholden to [the] timelines in the other movies,” but it’s clear Logan is going to be unlike any previous X-Men or Wolverine film. The gritty, no-holds-barred approach teased in the film may revitalize not just the tired, immortal mutant but perhaps the entire superhero genre itself.

When Logan comes out this March, it’ll be the ninth X-Men film. The X-Men series has had an interesting place in the comic-book movie pantheon. Bryan Singer’s original X-Men helped kick off the modern superhero genre as we know it back in 2000. If Logan is indeed going to be the last outing for Jackman as Wolverine, it’ll wrap up an on-screen mythology that’s been going on for nearly two decades.

Which makes it appropriate that Logan could very well be the darkest and least superheroic of the Marvel outings. 20th Century Fox screened the first act of the film last month to film journalists and bloggers. The response was overwhelmingly positive. The Playlist said “fans are finally getting the bloody, primal Wolverine they’ve always wanted.” They also said it feels “more western” with “faint traces” of what we’ve come to expect from the usual caped crusaders.

After years of Marvel drawing praise for embracing its comic-book roots, there’s a certain irony to Logan being hyped for feeling like an actual film that strays from those worn principles.

Which may be where the comic-book movie is headed. When Iron Man burst on the scene in 2008, it was a huge success and achievement. Marvel took a second-tier hero and turned him into an enormous box office hit, proving you don’t have to be Batman to get butts in the seats. Marvel has since owned the genre via accessible, connected movies.

These days, however, it’s criticized for forgoing a good story to focus on setting up the next part of the saga. Body counts are low, and the products lack tension and satisfying resolutions.

Logan is changing course. Jackman has recently stated the film is “a standalone movie in many ways” and that “it’s not really beholden to [the] timelines and storylines in the other movies. Obviously, Patrick Stewart is in there so we have some crossover, but it feels very different and very fresh.” Jackman went on referencing such movies as Unforgiven and The Wrestler as inspirations for Logan. Based on the trailers, the comparison to The Wrestler is its most obvious cinematic ancestor. (An old, tired fightin’ man struggles to get his life back on track.)

The film’s director, James Mangold, has also talked about ignoring what has come before in the series, telling Slash Film that “we had to free ourselves from some assumptions that had existed in the past, and be able to change the tone a bit.”

You can’t blame him. As of this writing, Marvel involves a homework assignment of 13 movies and several TV shows across multiple networks. Do you need to watch Agents of SHIELD to appreciate Captain America: Civil War? Is Netflix’s Daredevil required viewing for Luke Cage?

DC’s extended universe is likewise a mess that’s divided fans. Its three movies—Man of Steel, Batman v Superman: Dawn of Justice, and Suicide Squad—have all been critically panned. Even Universal is getting into the shared universe business by producing a remake of The Mummy starring Tom Cruise, as well as plans to remake classic movie monsters such as Frankenstein, Dracula, and Wolfman.

According to the Hollywood Reporter, 20th Century Fox is struggling with its own shared X-Men series after last summer’s X-Men: Apocalypse failed to generate excitement with critics and became only the seventh-most successful X-Men movie.

It’s no secret that side characters like Deadpool and Wolverine are thriving. Indeed Logan will benefit from distancing itself from the X-Men series by turning inward and offering up a standalone saga. We’ve reached a saturation point where extensive mythology is holding these heroes down. After Avengers: Infinity War features appearances from nearly every Marvel superhero ever, the big question will be: What happens next? When you have opened up the canvas as much as Marvel has, there might be not that much left to paint.

The western vibe fundamentally works for Wolverine, who is characterized by desperation, anger, and loneliness. If film studios continue with this approach, it will help differentiate these movies.

After Thor: The Dark World failed to internally understand if it was a Thor or Loki movie, the next film—Thor: Ragnarok—seems like it is in good hands. The film’s director, Taika Waiti, has made a name for himself directing movies that are all about identity. What Do We In the Shadows was a hilarious satire about vampires struggling to get along. Waiti’s Hunt for the Wilderpeople was a touching coming-of-age story of a young kid unsure of his place in the world.

If Waiti can give Thor, a character often underused in Marvel’s tentpole Avengers films, a sense of identity and personality, then that’s one step in helping him shine just as memorably or brightly. As Warner Bros. figures out the same for its diverse ensemble of DC heroes, Patty Jenkins’ Wonder Woman is a great opportunity for the iconic superhero to leave the doom and gloom to her male counterparts.

In the most recent trailer for Logan, Professor X talks about the importance of family. The theme of family has always been a recurring one in the X-Men series, especially for someone like Logan. He’s a character who has always wanted to fit in, like anyone who’s felt alienated.

If Logan can tap into Wolverine’s humanity and his internal battle for peace, we’ll have something for everyone. We connect with superheroes not because of their powers or costumes, but because they remind us of the better parts of ourselves. When stripped of their past and the restrictions that come along with it, they’ll have a better chance to claw their way back into our hearts.