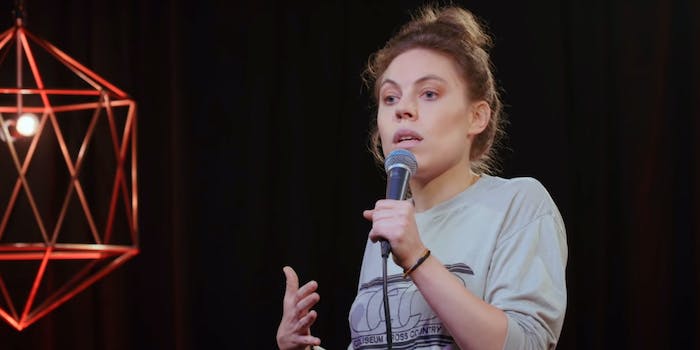 If you’re a woman who does comedy, and you put something out into the world (the internet), it’s a pretty safe bet that someone will offer immediate feedback on how the woman isn’t funny or hot. It’s so common now that it’s become a parody. Comedian Logan Guntzelman has taken it to the next level.

Guntzelman was part of the New Faces showcase at this year’s Just For Laughs festival and recently had a standup set air as part of the Comedy Central Stand-Up Featuring series. On Wednesday, she posted to Twitter to thank those who watched or “reached out.” She also took the “best YouTube comments on my set” and made a beautiful montage set to Céline Dion’s “Because You Loved Me.” And this montage has everything: comments on her looks and body, a gripe about there being “Too much women stuff,” Google translations, and a curious reference to German actress Palina Rojinski.

I wanted to sincerely thank everyone who has reached out to me after my Comedy Central @standup came out, but I’m bad at being sincere. Instead plz enjoy this poorly edited music video of the best YouTube comments on my set. pic.twitter.com/T0D9BZnuwY

Guntzelman tells the Daily Dot that this wasn’t so much a commentary on the comments women get as just something she found funny: “After my set went up on Comedy Central’s website, I started screenshotting the mean YouTube comments that I thought were funny. I couldn’t sleep [that] night and I was looking for a relaxing activity that would bore me into a state of exhaustion, so I started editing the screenshots together into a video. (It worked. I fell asleep.)”

You can view some of the other comments on the video below. To be fair, there are quite a few people who left positive ones, because Guntzelman is very funny and has an amazing spin on the period joke.