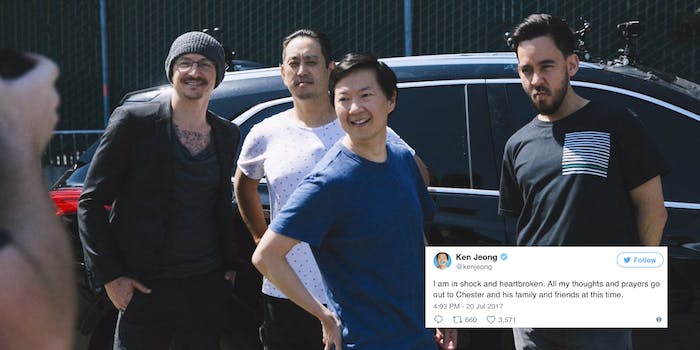 It should air in October.

Linkin Park frontman Chester Bennington’s untimely death last week came two months after the band’s most recent album was released and a week before their now-canceled tour, which means there’s a fair amount of press they’d been working on these last few weeks that’s in the can now.

One such clip is a Carpool Karaoke the band filmed for James Corden’s Late Late Show spinoff less than a week before the singer’s death. Much like Jimmy Fallon’s Lip Sync Battle, Corden is doing a series with Apple Music dedicated to his popular musical segment, and it’s set to premiere Aug. 8.

On July 14, the band piled into a car with comedian Ken Jeong to sing some tunes, and last week Jeong took to Twitter to express his condolences when news of Bennington’s passing broke.

“I am in shock and heartbroken,” he wrote. “All my thoughts and prayers go out to Chester and his family and friends at this time.”

I am in shock and heartbroken. All my thoughts and prayers go out to Chester and his family and friends at this time.

According to Variety, the episode will in October.