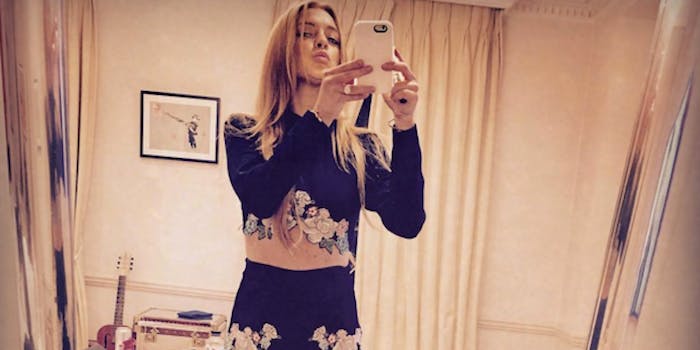 Lohan is apparently a fan of actress Sharon Tate, who was eight-and-a-half months pregnant when she was murdered by Manson’s followers in August 1969. Lohan posted this photo of herself decked out in a Tate-esque look, apparently as an homage:

As you might expect, the comment section is full of hundreds of people alternately criticizing and defending the photo. One commenter writes: “Yeah, way to show your love for someone. This is very disrespectful. Murdered while pregnant and you think it’s cute to dress as her on Manson’s Birthday.”

Another responds: “She’s paying tribute to a woman who was murdered. Its better to remember the victim than remember the murders. But keep trying to bash someone who literally does not care about any of you, youre all basically trash cans. Lindsay is a beautiful little fucking trainwreck, love her to bits.”

Manson is currently serving nine consecutive life sentences for murder and conspiracy in a California prison, so whatever the thinking behind the pic might have been, it’s safe to say he probably won’t see it.