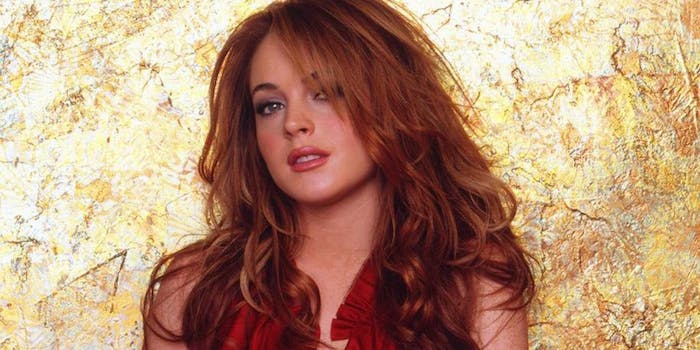 On Fridays, the White House will wear pink.

Proving that she still knows how to manipulate the press and stay relevant, Lindsay Lohan announced Friday via Instagram that she’s considering running for president in 2020.

Lohan posted the seemingly random pic of herself at some kind of awards dinner or charity gala along with a shout-out to Kanye West, Unicef, President Obama, New York’s Ali Forney Center for homeless LGBT youth, and @savethesociety, who appears to be Lohan’s ex-assistant.

Then, Lohan posted a second presidential pic—this time featuring her meeting Kanye West, who has also said he’s running in 2020. The caption laid out the first arm of her campaign platform (“take care of all of the children”) along with a mini-resume of her experience and expertise (“Queen Elizabeth showed me how by having me in her country.”)

Most of the comments made fun of Lohan, but some fans seemed to legitimately cheer her on. One commenter in particular had a lot to say about Lindsay’s political qualifications and her instinct for environmental and animal rights policy.

YES I LOVE MY BUBBLE GUM CANDY! AS MY BUMBLEBEE HOTTIE HONEY BUNNY RABBIT CUTIE PIE! BABE! MY LOVE SWEETHEART MY VANILLA ICE CREAM SANDWICH! AS MY SUNSHINE AS MY LINDSAY,S AND LOHAN,S! GOOD MORNING BEAUTIFUL SUNFLOWER! YOU HAVE FUN A DAY! YES I LOVE YOU! I LOVE YOU! IM JUST GOING TO TAKE MY MORNING JOG! AS LISTEN TO MY RADIO! I LOVE YOU! I LOVE YOU! LOVE FROM YOUR SEXY LOVER BOY BOYFRIEND HOTTIE FIREMAN KANGAROO MAGAZINE MAGIC HAT LOVER BABE! JOSEPHMCCORKLE

Or at least we think that’s what that is.

Sadly, Lohan’s chances at a seat in the Oval Office are slim due to her criminal record. It’s cool that she’s embracing aging, though. The 29-year-old actress will indeed be turning 34 during the 2020 election year, which would make her 35 when she took office. That’s what people do at 35, right? Run for president and stuff?

We need to work on that foreign policy, though, Linds. After you posted a pic of Arabic script that you thought meant “you’re beautiful” but actually translated to “you’re a donkey,” we’re a little concerned about your future mitigating conflicts in the Middle East.

Photo via jkuttarkabat/Flickr (CC BY SA 2.0)