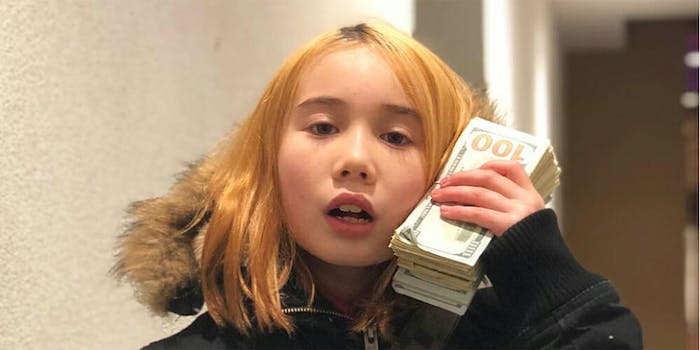 Plenty of people have asked about the whereabouts of the parents of Lil Tay, a 9-year-old whose apparent claim to fame is waving stacks of money at her 1.7 million Instagram followers and catchphrases like, “Y’all bitches can’t afford this shit, OK?”

According to a report from Vice, the social media sensation’s mom was just fired from her job at a Vancouver real estate agency—because of Lil Tay herself.

In Instagram and YouTube videos, Lil Tay curses, fans or throws around hundred dollar bills, and claims to buy luxury cars she can’t buy. She brags relentlessly about her wealth, mocks anyone who’s poorer than her, and has drama with Danielle Bregoli, aka Bhad Bhabie, aka the “cash me ousside” teen.

The growing attention on social media, according to Vice, may have cost Lil Tay’s mom her job. Angela Tian, a Vancouver real estate agent who has occasionally been spotted in the background of her daughter’s videos, reportedly worked at Pacific West Realty for six months before being fired last week.

“When we found out about this activity last week we had to dismiss her,” Jim Lew, director of business development for Pacific Place Group, told Daily Hive, adding the behavior in Lil Tay’s videos has “no place” in the real estate industry.

Vice confirmed with the company that Tian no longer works there. But if the stacks of money Lil Tay waves around in videos are any indication, they have plenty of money to spare.