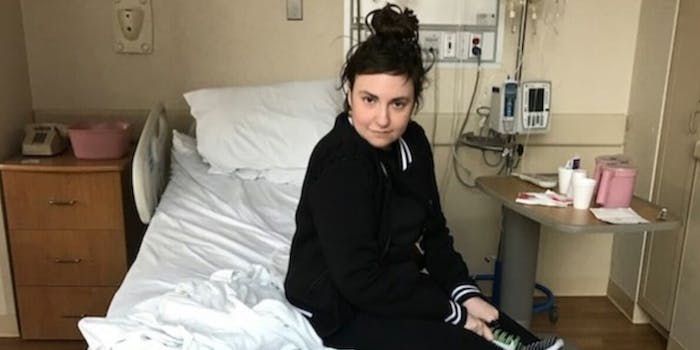 Dunham's essay also provides fans a hint as to why she and Jack Antonoff split.

Lena Dunham penned a heartbreakingly powerful essay for Vogue on Wednesday about her recent hysterectomy, which was her ninth surgical procedure after a decade-long battle with endometriosis.

Dunham has been vocal on Instagram about her battle with the disorder, which is a painful disease where tissue that normally lines the inside of your uterus—the endometrium—grows outside your uterus. The letter, however, was the first time she discussed her decision to have her uterus removed.

“Because I had to work so hard to have my pain acknowledged, there was no time to feel fear or grief. To say goodbye,” she wrote. “I made a choice that never was a choice for me, yet mourning feels like a luxury I don’t have. I weep, big stupid sobs, alone in the bathtub or in the area where, in a terribly cliche turn, I have started crafting.”

In the essay, the 31-year-old actress describes how she’s known since she was a child that she wanted to be a mother. But after eight failed procedures, she felt the hysterectomy was the right decision.

Dunham also mentions her now ex-boyfriend, singer and producer Jack Antonoff, and how she knew they were going to break up soon. Her comments imply that her hysterectomy may have added significant stress to the relationship.

“My beautiful partner, who has seen me through so much pain with compassion and care, has to be away for work, and I can feel us growing slowly apart, since life is so determined to display its full complexity right now,” she wrote. “I am surly and distant. I offer nothing. He reminds me again and again that I am still a woman and still alive, but I also know that soon—for so many reasons that have nothing to do with my uterus—we’ll slip away from each other and I will face everything I am losing in impossibly tiny steps.”

Antonoff shared her essay on Twitter and called it “beautiful.”

Dunham said on Friday that she’s received a lot of messages from other women either suffering from endometriosis or who have elected to have a hysterectomy.

Your body failing you is a loss that’s hard to explain and yet the amount of messages I’ve gotten from women in a similar predicament has been so overwhelming, loving and heartening. 1/4

60 million women in America are living with hysterectomies and those of you who’ve shared your plight and perseverance makes me feel so honored to be in your company. 2/4

My illness & choice was just that: MY choice. I’m not a doctor and I SURE DON’T CLAIM TO BE, but sharing this piece which delves deeper into the options women have. My decision was what was best for me and I hope this helps you make the best decision for you & your health 3/4

Some women on Twitter, however, criticized Dunham and Vogue for implying that getting a hysterectomy will cure her endometriosis. According to the University of Maryland’s Medical Center, the surgery might not cure a patient but is considered the best option for women with more severe cases of the disorder.

In her letter, Dunham said she plans to explore other options to have children, such as in-vitro fertilization—she still has ovaries, just nowhere for a fetus to develop—and adoption.

“I was meant for the job, but I didn’t pass the interview,” she wrote. “And that’s OK. It really is. I might not believe it now, but I will soon enough. And all that will be left is my story and my scars, which are already faded enough that they’re hard to find.