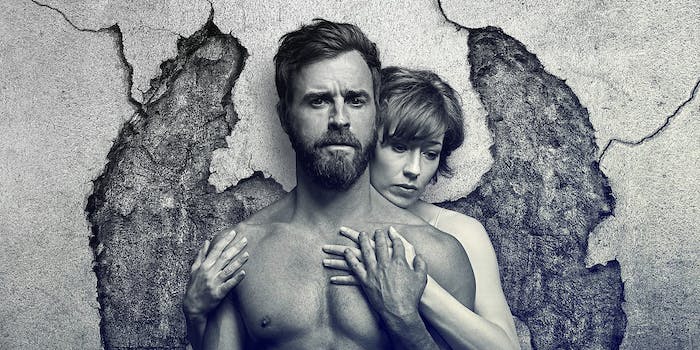 Great shows rarely arrive fully formed. Like Seinfeld or Breaking Bad, they take time to grow and settle into their idiosyncrasies. The first season of HBO’s The Leftovers, based on the novel by Tom Perrotta, was as ambitious as it was frustrating. Created by Perrotta and Damon Lindelof, the show was everything that was great and terrible about Lost, Lindelof’s previous program. The Leftovers was just compelling enough to drive you wild when it devolved into pseudo-profound nonsense.

The frustration, though, had its upsides. Carrie Coon gave a compulsively watchable performance as Nora, a fraud investigator who wears her grief like a second skin. She lost her husband and both of her children in “the Departure,” a Rapture-like event in which 2 percent of the world’s population mysteriously vanished.

In the show’s third season, Nora seeks answers from a mysterious man calling himself “Mark-Linn Baker,” the actor from the ‘80s sitcom Perfect Strangers. After Mark telephones her out of the blue, seeming to know a great deal about her life, he offers her a chance to see her family again. They meet in a hotel room, and it’s really him. Mark’s cast mates were taken in the Departure, and when he was left behind, he fled to Mexico, faking his own celestial disappearance. Eventually, the ruse was discovered, and Mark has since devoted his life to finding a portal to the other side. He thinks he has found it.

“Four series regulars,” Mark says, in explanation of his obsession, “Three go, one stays. Me. Do you know what the odds of that are?” Having lived it, Nora has done the math. “One in 128,000,” she interjects. In this strange and surreal moment, two strangers in a strange place find unexpectedly that they are kindred spirits.

This scene—in its eccentric yet disarming beauty—encapsulates the great show that The Leftovers has become. It is the most audacious hour on television, going places other shows wouldn’t dare tread, and yet every risk is rewarded with aplomb. The show’s trademark narrative digressions, which once held viewers at arm’s length, reveal surprising depths within the world of Jardin, Texas, and the lives of those who inhabit it. A preacher, Matt (Christopher Eccleston), whose wife has recently left him, finds a man at an orgy who claims to be God. Matt hopes to reveal him as a fraud. Instead it’s Matt who is unmasked, as the self-described deity questions the pastor’s faith. Matt asks why he would continually sacrifice—even offering up his own marriage as proof of his devotion—if not for God.

The man informs Matt of what’s obvious to everyone but him: He didn’t do it for the divine. Matt did it for himself.

The second season of The Leftovers wrapped just as Jardin, the only city in America with no departures, is torn apart by that veneer of piety. Its citizens believe they are the chosen people. But members of the Guilty Remnant (or “GR”), a silent cult who dresses in all white, storm the planned community as a statement: No one is safe. This season’s premiere begins after the GR is extinguished in an explosion amid the chaos. Evie (Jasmin Savoy Brown), a rebellious teenager who joined the group without explanation, is killed. Rumors abound as to the cause. Was it a gas leak ignited by one of the cult member’s cigarettes, as local police claim, or a drone bomb from the government?

The Leftovers flash forwards three years after Jardin rebuilt from the wreckage. Evie’s parents have divorced. Her father, John (Kevin Carroll), has quit his job as the police chief and remarried. The bride just happens to be Laurie (Amy Brenneman), the ex-wife of Kevin (Justin Theroux), who took over John’s post. John and Laurie give fake psychic readings to clients hoping to communicate with loved ones who have died. They only have one rule: They don’t do Departures. When a person has died from natural causes, their relatives and friends want closure. Those who were left behind in the Departure don’t.

After Kevin’s season 2 resurrection, Matt has written a book claiming that he is the Messiah. Kevin finds his gospel flattering, but being the second coming of Jesus Christ is a big responsibility when you just want to get home in time for dinner.

Jardin’s new equilibrium is tested as the town approaches the seventh anniversary of the departure, what many believe will be the end of the world. Kevin’s father (Scott Glenn) believes there will be a great flood. The Leftovers, though, asks a much thornier question: What if the Apocalypse never came? Would humankind blow up the world anyway, just to avoid being disappointed?

To watch The Leftovers in the Age of President Trump is pointedly chilling. Lindelof himself has said that Trump appealed to Christian evangelicals because they hoped he might kickstart the End Times, when all the evils of the world would be wiped out and the good would receive eternal glory. The Leftovers, which is unafraid to deal with black and uncomfortable subject matter, has earned a reputation as the most depressing show on television, but it’s uplifting in an extremely unconventional way. Although the show is ostensibly about how humans deal with the inevitability of death, The Leftovers is also about life—even as cliche as that sounds.

As the clock winds down in Jardin, The Leftovers offers its best answer to that old party game: What would you do if you had 10 days to live? Would you spend it with those you love or try to get to the other side sooner, just in case the Apocalypse doesn’t happen?

That’s a pretty well-worn concept, but The Leftovers explores those themes in ways unlike anything you’ve ever seen on television. What’s great about the seven episodes provided to critics is that they are totally unpredictable, as if anything could happen. It frequently does, offering viewers those great, slyly funny WTF moments of seasons past. A scene involving A-Ha’s “Take on Me” even threatens to break out into a musical. Elsewhere, Nora leaves for Australia to meet Mark’s associates, who have invented a ray that will either kill you or allow you to be reunited with your Departed loved ones. While waiting for the bus to their offices, a woman randomly hands her a baby, asking her to hold the newborn while she interviews for a job. Is this a test, Nora wonders, or random chance?

Like with a lot of The Leftovers, it’s difficult to know the difference. But as the series has deepened and become more confident, its unanswered questions have become beguiling instead of maddening. Each episode feels like you could watch it over and over again and uncover something new each time, like a Russian doll you can never quite get to the center of.

I hated The Leftovers at first, but as the show winds to a close, I’m pleased to say that there are few seasons of television I’ve connected to as wholly as this one. It’s so rapturous that to list its attributes almost feels perfunctory. The direction, writing, and acting are superb. Theroux, more of a chalk outline than a fully formed person in previous seasons, comes into his own here—revealing an aching soul searching for meaning. Deep down, Kevin knows he isn’t God, and maybe he doesn’t want to be. But wouldn’t it be nice to have a purpose? While your friends and family scramble to prepare for mankind’s imminent destruction, wouldn’t you like to be able to tell them that everything’s going to be OK?

I can’t recommend this season of The Leftovers more highly. It is everything television should be. As a fan, I imagine myself continually returning to it throughout the course of my life, seeking wisdom and even comfort. What will it mean to me at 45, 55, or however long humanity has left before we become our own self-fulfilling prophecy? Some shows you watch, but others become a part of you.