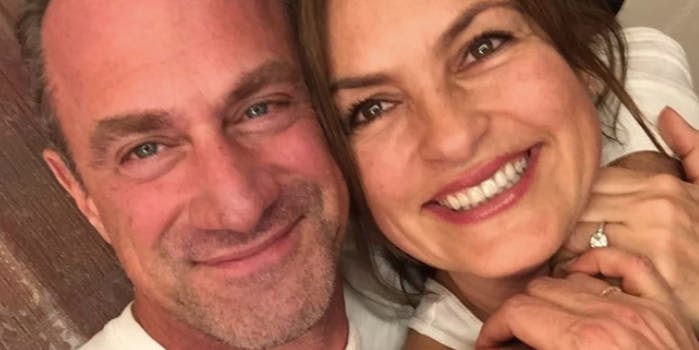 Could an onscreen reunion be in the works?

“In the criminal justice system, sexually based offenses are considered especially heinous. In New York City, the dedicated detectives who investigate these vicious felonies are members of an elite squad known as the Special Victims Unit.” These are their Instagrams.

Christopher Meloni and Mariska Hargitay tracked down those terrible criminals together for 12 years on Law & Order: Special Victims Unit. But he abruptly left the show before its 13th season, after 270-odd cases together, leaving Hargitay’s Olivia Benson to find a new partner. While Benson may have joined with rookie Nick Amaro (Danny Pino) in the meantime, the former co-stars’ friendship continues off-screen.

It’s a much more recognizable photo than their last encounter in March, when Meloni was sporting a bushy beard:

Both of the photos understandably have prompted fans to speculate about a Benson/Stabler reunion on SVU, but it sounds like we’ll all have to wait at least one more season for that, after the show was renewed for its 18th.