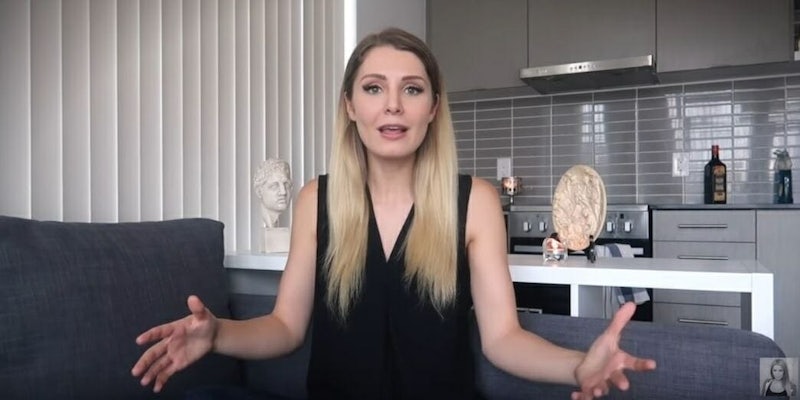 She threatened to cause 'chaos.'

A Canadian YouTube star with more than 563,000 subscribers has reportedly been denied entry into Australia ahead of her speaking tour.

Lauren Southern, a far-right social media star, had planned on a tour of Australia and New Zealand alongside fellow right-wing commentator Stefan Molyneux where she had threatened to cause “chaos,” but a day before she was to travel across the world to get to Australia, the country’s visa bureau said her application had been denied, according to the Daily Mail.

In an email to Southern, the visa bureau said she still could apply for a visitor’s visa instead of the Electronic Travel Authority she had requested. According to the government, an ETA does not allow you to work in Australia.

On Twitter, meanwhile, the 23-year-old Southern wrote, “To the people saying ‘she applied for the wrong visa’ I’ve taken the advice of immigration lawyers from day one. This twitter lawyering is silly. I have no interest in being banned from Aus and am still attempting to fight for my extremely delayed work visa.”

The Daily Telegraph has reported that Southern has now applied for a visitor’s visa.

Southern has been a controversial figure in her home country, and last March, she was banned from traveling to the U.K., because as a spokesperson said, the country “has the power to refuse entry to an individual if it is considered that his or her presence in the UK is not conducive to the public good.” A month earlier, Southern had passed out flyers in the U.K. saying “Allah is a gay god” and “Allah is trans.”

For her Australian trip, Southern said, via the Daily Mail, that she hoped “to cause chaos in a good way as I have every other country I’ve gone to.” She acknowledged that fellow right-winger Milo Yiannopoulos had faced plenty of backlash during his Australian tour late last year, but she said the “joy would outweigh the hate.”

Southern also tweeted that she received a letter saying she was unable to enter New Zealand because of her U.K. ban but that, soon after, the country realized its mistake. Still, Phil Goff—the mayor of Auckland, New Zealand—said the pair wasn’t welcome, writing on Twitter that city “venues shouldn’t be used to stir up ethnic or religious tensions. Views that divide rather than unite are repugnant and I have made my views on this very clear. Lauren Southern and Stefan Molyneux will not be speaking at any Council venues.”

In the past, Southern has worn a sign that said, “There is no rape culture in the West,” and she’s mocked transgender people by saying she was going to become a man.

Here is some of her work.

In a podcast interview with the Daily Telegraph, Southern said it’s a free speech issue.

“I am not surprised they are dragging out the process because there are so many people who get offended by free speech and free debate that sometimes governments cower and think it is easy to play into the hands of people who are totalitarian,” she said. “We are not illegals and we are not trying to go there and change the culture for the worse … We want to bring some excitement and debate. It sets a scary precedent for free speech (in Australia).”