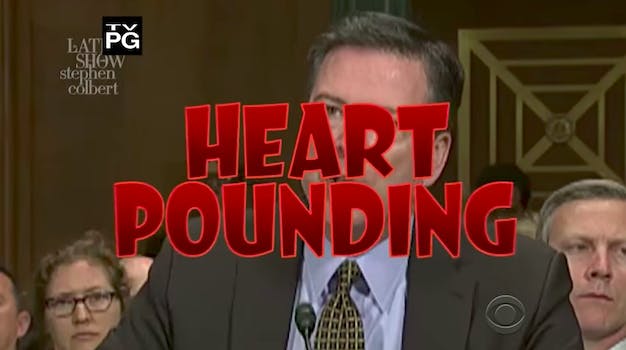 ‘The place will be hopping, the beers will be flowing, and the wings—just like the testimony—will be hot!’

Former FBI Director James Comey is set to testify before the Senate Thursday, which will be watched even more closely after Comey’s prepared statement was released early. With the chance of it being a spectacle both within the Capitol and among those planning to attend viewing parties, late-night gave it the entertainment ramp-up it deserves.

Stephen Colbert quickly gave Comey’s testimony a proper WWE-style promotion complete with wrestling names for some of the Senate Intelligence Committee members set to question Comey. But unlike many of those must-see WWE events, this potential smackdown is free to watch.

Meanwhile, Conan O’Brien focused more on the viewing parties themselves. It’s Washington’s Super Bowl (until the next one), so at least one place has some “Comey combos” for those looking to come in to watch the testimony—and eat and drink.

Samantha Bee went a different route and revamped Comey’s account of his meetings with Trump into a romantic tale. After all, his statement had lots of juicy details that had the makings of an awkward meet-cute, with a side of potential obstruction of justice. You know, perfect rom-com fodder.

But if actual analyzation is more your thing, the late-night hosts did plenty of that too—with many of them making similar observations.

Colbert compared Comey’s reaction to Trump to how characters in Jurassic Park treated the T-Rex, and looked at how much Comey’s private dinner with Trump looked like a date.

“Oh come on, that’s the oldest trick in the book!” Colbert said. “You invite your FBI Director over for a movie saying ‘it’s gonna be a group thing.’ When he shows up it’s just the two of you. Can’t make Netflix work, so, you know, so you obstruct justice.”

Jimmy Kimmel also noticed how much Comey’s description of his dinner with Trump sounded like a kind of romance novel—calling it Fifty Shades of Orange—and noted another nugget that got a lot of play online.

“I love that he had to deny being involved with hookers in Russia,” Kimmel said. “Let me tell you, Bill Clinton must be laughing his ass off right now.”

In his latest “A Closer Look” segment, Seth Meyers compared Comey and Trump’s dinner to “a terrible Tinder date” and a John Grisham novel.

“Comey had no idea the meeting would be a private, one-on-one encounter,” Meyers said. “This is starting to sound less like All the President’s Men and more like a Lifetime original movie: ‘James Comey and Donald Trump star in Suspicious Attraction.'”