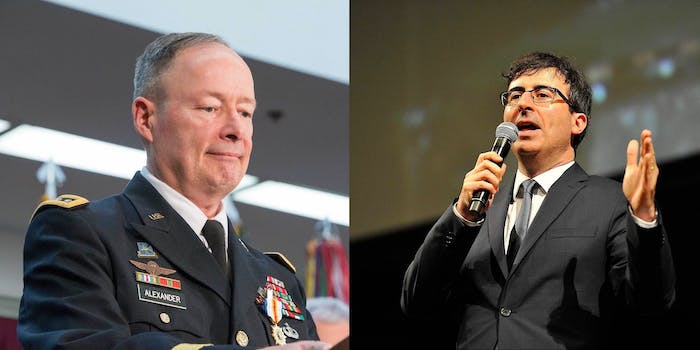 Gen. Keith Alexander has certainly upped his comedy game since his retirement from chief of the National Security Agency.

While it wasn’t quite as punchy as President Barack Obama’s appearance on Zach Galifianakis’ Between Two Ferns, Alexander held his own as the guest on Sunday’s premiere episode of HBO’s Last Week Tonight, a weekly satirical news show hosted by Daily Show-alum John Oliver.

Sunday night’s guest will be General Keith Alexander, former head of the NSA. Tune in to learn about him. (He already knows about you.)

Throughout the interview, Alexander conspicuously still used the pronoun “we” to refer to the NSA even though he retired from his dual position as Director of the NSA and U.S. Cyber Command on March 31.

Alexander spent much of the last nine months of his eight-year term defending the NSA in the global debate on surveillance that erupted due to an ongoing series of media reports fueled by documents leaked by former NSA contractor Edward Snowden.

The four-star Army general remained stone-faced during the first few minutes of interview, as he recited his well-rehearsed defense of the agency to Oliver. Why should the American people trust the NSA, Oliver asked.

“Because of what they do to protect this country every day,” Alexander said. “These are good people, trying to do the right thing.”

Even though he already had plans to retire, Alexander reportedly offered to step down after the Snowden leak, but the White House did not accept his early resignation. Navy Vice Admiral Michael Rogers has since succeeded Alexander.

Despite his initial serious demeanor during the interview, Alexander did conveniently pause in the middle of a few sentences, allowing Oliver to insert some zingers. But it wasn’t until Oliver suggested that the NSA should rebrand itself as “Mr. Tiggles,” with a logo of a kitten popping its head out of a red boot, that Alexander actually giggled.

The two men found common ground on rebranding the NSA as “the only agency in government that really listens.”

Oliver was a correspondent on The Daily Show from 2006 to 2013, and he hosted the program for a three-month span in 2013 when its usual host, Jon Stewart, was on leave. Oliver also co-hosts a satirical podcast about the news called The Bugle; there have been 266 installments of the podcast since its debut in 2007.

Aside from the interview with Alexander, another highlight of the Last Week Tonight premier came when Oliver took shots at cable news networks for their already-extensive coverage of the U.S. presidential election, which is more than a year away, over the current election happening in India. About one-sixth of the world’s population lives in India.

Watch an extended version of John Oliver’s interview with Gen. Alexander below:

Photos by Chairman of the Joint Chiefs of Staff/Flickr and TechCrunch/Flickr (CC BY 2.0)