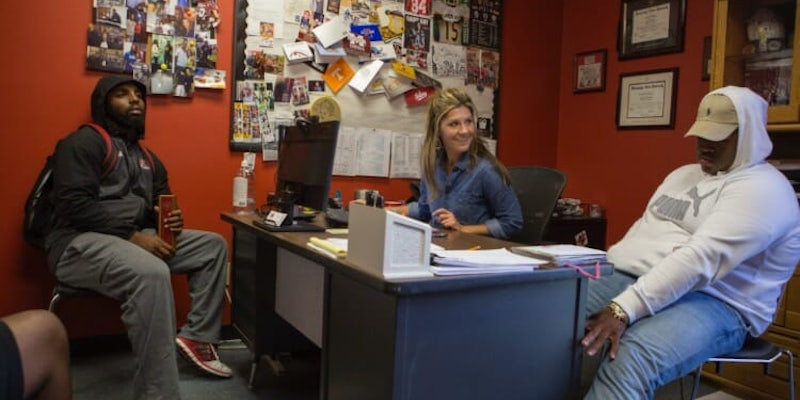 This docuseries packs punch, even for non-football fans.

Netflix’s docuseries Last Chance U is a cross between Friday Night Lights and Hardknocks. Like the NBC series it shows a small town where football is everything, and like the HBO series it highlights young men doing everything to chase a dream that is evaporating in front of them.

Last Chance U isn’t as successful as FNL at maximizing the human drama, despite having charismatic people to follow. It is, for what it’s worth, on par with Hardknocks at capturing the all-consuming nature of the sport. If you’re a football fan Last Chance U will scratch the itch before the season gets here. For non-fans, the show is worthwhile if you have patience.

Back for a second season, Last Chance U follows the day-to-day grind of the East Mississippi Community College Lions’ 2016 season. Coach Buddy Stevens and his staff are dealing with the fallout from the previous season, after a bench-clearing crawl dashed the Lions’ title hopes. Banned from the 2015 postseason, the Lions have to play the 2016 opener with nearly half the team suspended. The 33 underclassmen who take the field come home with the result you’d expect. The opening loss looms over the season as the Lions try to regain their front-runner status. If you’re interested in the football aspect of the show, I suggest stopping after the opener. See, EMCC is a junior college juggernaut and the rest of their games are mostly beatdowns as the Lions try to impress the pollsters with style points. It doesn’t make for thrilling viewing.

Most community college teams are built with players looking to boost their grades to facilitate a transfer to a four-year school. Or players whose playing days are nearly over. East Mississippi focuses on recruiting stud players kicked out of Division I programs and helps rehab their image. So their team is stacked with players looking for their… wait for it… last chance.

But, as a coach from a rival school sums it up, it’s really more of a second or third chance for these guys. Their extraordinary talent buys them more chances they deserve in some cases. Each episode spends most of its time with the players, digging into their past and following their progress. The show also follows the coaches, primarily Buddy, and the team’s academic adviser, Brittany Wagner.

Of all the people we follow, Coach Stevens ends up being the least compelling part. It wouldn’t be as big an issue if he weren’t the dominant figure. His major arc this season is trying to curse less. I can’t say it’s too engaging, especially when Stevens loses his temper during every game and most practices. He’s most interesting during talking-head segments filmed while he’s on the road. In these interviews he’s clear-minded and open, whereas on the field he’s a bundle of predictability. Brittany, on the other hand, is the most compelling person on the show. Her compassion for the students is palpable, as is her frustration when players won’t look away from their phones or don’t take their discussions seriously. With her you really feel the weight of the season and the looming deadlines.

The most interesting aspect of the show isn’t whether EMCC will win. Seeing what the players do with their “last” chance is. Through the players the show is able to explore many of the most common topics that dominate the conversation around football. Take the quarterback, De’Andre Johnson. He punched a woman at a bar and was dismissed from Florida State. You can’t help but think about another FSU QB, Jameis Winston, and how badly that situation was handled by the school and its community, which appeared to actively discredit Winston’s alleged rape victim.

Johnson shares nothing more than a school with Winston, but you can’t help but think of the institution as having a complicit role in violence against women. Yet of all the players in the spotlight, Johnson comes across as the most repentant player. His remorse feels sincere, as does his disappointment when his past comes back to bite him.

I wish the show spent more time with Johnson. His situation is laid out in the second episode then takes a backseat until the end. That episode opens with a brutally honest interview with Stevens. He speaks on the transactional nature of the relationship between EMCC and its star players. Everyone is there to get something out of someone. This idea is broached a few other times, but never as directly as it is here. In football terms, the show leaves plays on the field by not digging in a bit deeper.

The player who dominates much of the season is supremely talented running back Isaiah Wright. He suffers a concussion early in the season and watching him struggle in his recovery is the source of the show’s most potent moments. Sitting on the bench with a teammate Wright says, “I don’t know where the fuck I am.” In a show full of revealing moments, this is as real as it gets. It’s haunting, and makes it more devastating later when he’s in the locker room yelling about how football is everything for him and he’s willing to die for it. You hope he’s exaggerating, but watching, it feels too real. Between that, his indifference to his schoolwork, and, later, a sprained ankle, Wright is the most conflicted player.

The nuts and bolts of a football season come with built-in drama and action. Combined with the level of access directors Greg Whiteley and Adam Ridley have, Last Chance U is captivating. It’s also great at capturing the pressure-cooker atmosphere that football creates. But there are hints of what it could have been. Near the end of the season, coverage of the 2016 presidential election creeps in, and we see the players and a few town locals discuss it. These moments are interesting, but I’m not entirely sure why they’re here. It’s the only external element that encroaches on the football, but the show doesn’t do anything with it.

Fans of the sport with certainly find themselves caught up in the ups and downs of the Lions’ season. Crossover appeal for non-fans is minimal, but at eight episodes, I recommend giving the show a chance. The second episode in particular is strong. As far as sports documentaries go, Last Chance U is a worthy entry.