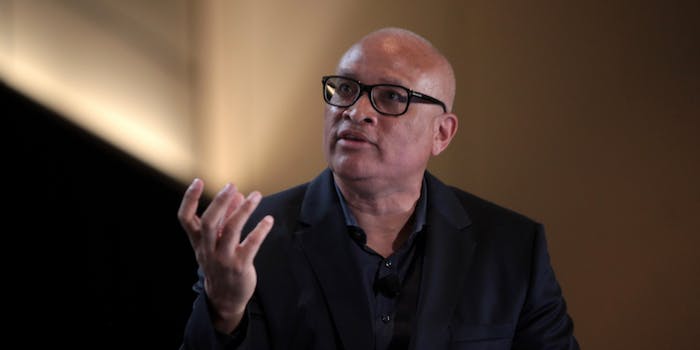 Larry Wilmore is launching a podcast

His first guest will be Norman Lear.

It’s been months since Comedy Central canceled Larry Wilmore’s The Nightly Show, but now he’s coming back with another show—this time for our earbuds.

Wilmore announced Tuesday that he’ll be hosting Black on the Air, a new podcast that’ll be part of Bill Simmons’ Ringer Podcast Network. On the podcast, which launches this Thursday, Wilmore “weighs in on the issues of the week and interviews guests in the worlds of politics, entertainment, culture, sports, and beyond.”

In a press release, Simmons praised Wilmore for his voice while he poked fun at the notion that pretty much everyone has a podcast now.

“Larry is one of a kind—not just one of the best thinkers and fearless voices we have, but someone who can talk to anyone about anything … I think it makes perfect sense for Larry to become the 22,354,919th human being with a podcast,” Simmons said.

Wilmore recently appeared on Simmons’ own podcast a couple months ago, covering a variety of topics. In a newly released teaser for Black on the Air, Wilmore and Simmons teased an alternative name for the podcast and what listeners could expect to hear. Primarily, Wilmore’s voice and thoughts plus chats with interesting people.

His first guest will be Norman Lear, the legendary television producer behind All in the Family, The Jeffersons, One Day at a Time, Sanford and Son, and Maude, who also recently got into podcasting. Wilmore will also chat with Bernie Sanders and Neil deGrasse Tyson in future episodes.