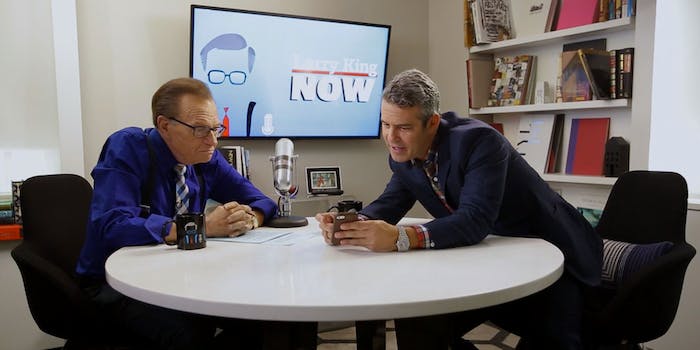 Larry King's attempt to understand Tinder will prime you for your grandparents' questions.

The majority of Tinder connections don’t make it past chatting, let alone a first date. But for the few that do, the time will come when you’ll want introduce your beloved swipe right to your parents and grandparents. You could go with a convenient lie about making eyes across a crowded bar, or you could go with the much more circuitous truth.

Unfortunately, there isn’t an explainer class on Tinder offered at the Apple Genius for confused grandparents, but there is Larry King. America’s loveable curmudgeon sat down with Bravo’s Andy Cohen so he could understand the dating app. Thanks to the twosome’s chat, you’ll be better prepared to field those naive questions from grandparents who are still trying to master emojis. Some examples to anticipate:

– “The interactions begin with the high fives?”

– “Is it all based on looks? And nothing about personality?”

King’s such an adept learner that in mere minutes he’s playing the perfect digital wingman to Cohen’s matches. He’s so confident in his skills that he even predicts a Tinder wedding which he’ll officiate.