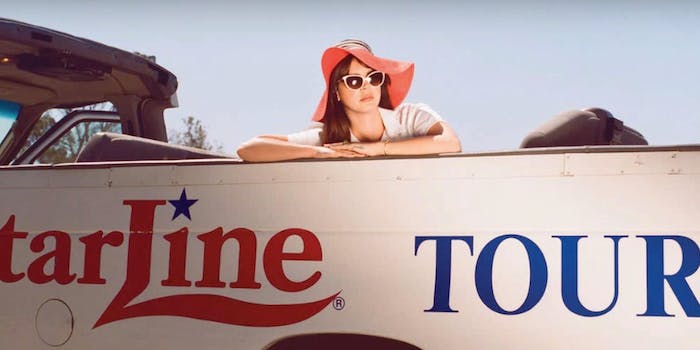 If you’ve ever wanted a direct line to Lana Del Rey, you’re in luck.

The singer posted to Instagram last night, asking fans to call the number that appears on the cover of her new album, Honeymoon.

These people r so lucky. Smh. •#lanadelrey I wish this was me

I called the number on Thursday morning, and got a recording of Del Rey reciting T.S. Eliot’s “Burnt Norton” over some ambient music. Once you’ve gotten through, you can choose your own adventure by pressing 1 through 4 to get different songs or audio recordings, such as Lawrence Krauss on the origins of the universe (Del Rey’s “favorite lecture,” she says), or a TED Talk with Elon Musk.

The number’s been spottily functional for about a month now, but last night was the first time she urged fans to call and speak with her. A 2014 Fader interview might have predicted this: She claimed to be more interested in “SpaceX and Tesla” than answering questions about feminism. She added: “My idea of a true feminist is a woman who feels free enough to do whatever she wants.”

Much of the past criticism of Del Rey has hinged on claims that she’s an industry construct, that she’s not authentic enough (or feminist enough). That her musings about death and depression are misguided. In her Pitchfork review of Honeymoon, Jessica Hopper considers the opening track and the California dream Del Rey has laid out for us:

In the space of one lyric, she posits the invisible, real city running parallel to the gleaming, manufactured one, sketching an arterial map of a city coursing with ambition. It reminds us of something that was the very issue with Del Rey that irritated some early on—she knows exactly what she is doing. Honeymoon just synthesizes ideas she’s been vamping on from the beginning into a unified work.

This hotline is a perhaps way to let fans experience the real Lana, however fleeting that experience might be. After 14 tries, I was no closer to knowing her, but that’s sort of fitting. She’s offering her version of the Hollywood “star” tours that offer us a look into a stranger’s life, or at least a peek in their window. It’s up to them to pull back the curtain.