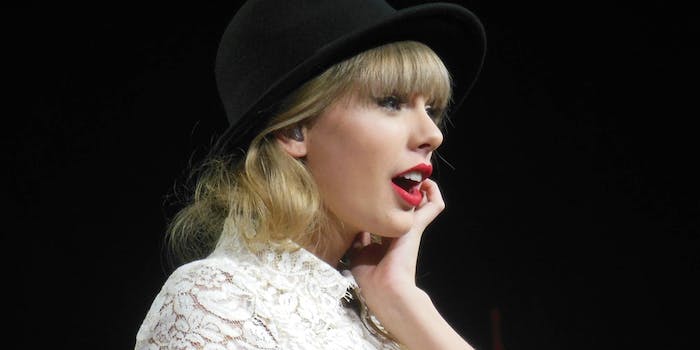 Lady-splaining Taylor Swift to boys: Her image doesn’t need to be sexy

Taylor Swift is selling herself as something we’ve been led to believe that women don’t want or can’t handle: a best friend.

The other night a male friend asked me about the appeal of Taylor Swift. “It’s not like she’s sexy like any of the other pop stars,” he said. “So why is she so popular?” I didn’t even flinch in my response, “It’s because she’s everyone’s BFF.” I don’t think I’d ever thought about it before, because I’ve never really thought of Taylor Swift as an “image” until very recently. For everything up until Red, Taylor Swift was just a talented young woman with country leanings who represented a generic kind of accessible star, nothing that Disney hadn’t provided before.

Taylor Swift’s talents as an actual songwriter were probably underestimated in the beginning, which is why it took so long for her machine to formulate a proper image for her. Unlike most pop stars, Taylor Swift began with the raw talent, and is only now rounding it out with a definable persona. Most start the other way around, because they don’t have the ground-up ability to actually participate in the creation of their music the way Swift does (Rihanna, Britney, even Beyoncé, who might be a genius creative director, but who hasn’t proven yet that she has the talent to write alone). Even pop stars that can write, like Katy Perry and Ke$ha, still began with the big personalities. Audiences pay attention to big personalities (and boobs, you know I really mean boobs).

By comparison, Taylor Swift practically wrote her entire second album, Fearless, which put her on the map with “Love Story” (her highest selling single to date, which she wrote alone) at age nineteen. Two years later she penned the entirety of Speak Now (she also had a hand in its production), which promptly went quadruple platinum. And Taylor Swift, for the most part, was just a girl. In this beginning part of her career, she was vaguely marketed as an all-American good girl, but that image was always secondary to her songs, which sold her without her having to do very much other than play them. But in the aftermath of Speak Now’s phenomenal success, which secured Taylor’s spot as a chart-topping woman in pop next to the Beyoncés and Katy Perrys of the world, it clearly became pertinent to the Taylor Swift machine that the girl needed a definable persona in order to exist in this portion of the pop stratosphere. Because as we all know by now, you can’t rest on the laurels of talent alone to be an enduring pop presence—whether male or female, you have to BE someone as well. And it’s best if that someone is easily described with three or less words (look, I’m not saying a good pop personality has to be dynamic or complex!).

It’s not necessarily reductive or sexist to think of female pop stars as having sex appeal. Every current chart-topping female performer bases their character on some kind of attractive/hot/provocative/sexy prototype. Even someone like Meghan Trainor who is “all about that bass” wields her voluptuousness in a boringly infantilized sexy way. So Taylor Swift, who is not the cool girl at the party, who dances like your whiter than white aunt from the Mid-West after two glasses of rosé at Christmas, who is all elbows and knees and angles, who is smarter than you and always looks like she just showered, and who is taller than you and flat in the front and the back, but still intimidatingly statuesque, didn’t even try to make sexy her thing. That’s not to say Taylor Swift isn’t sexy—she’s just not selling herself that way. Bar Lorde she might be the only woman in pop who’s putting sex appeal on the back burner.

Taylor Swift was always very bland, in part because she began her career as a white, middle class teenage girl. She wasn’t controversial, and she didn’t really have much interesting to say, that is, her songs were all about things white, middle class teenage girls care about, such as the boys they like, fitting in with the boys they like, and bitching about the girls the boys they like like. But Taylor Swift isn’t so bland any more. She’s gone from teenager with privileged problems to a young woman with a point, who recognizes her privilege, and is happy to be goofy about it. She still cares about love, and that’s alright, because if there wasn’t music about love there wouldn’t be all that much music. The wonderful thing about Taylor Swift having been a dorky teen and now an articulate woman is that she’s invited her fans along on the journey. She’s admitted her faults, learned from her mistakes, and rather than be known as the girl who dates all the cute, rich, flop-haired boys, she’s transformed herself into an independent woman who’s more concerned with surrounding herself with other independent women. Writing diary-esque sob songs for John Mayer is so very 2010.

Essentially Taylor Swift is selling herself as something we’ve been led to believe that women don’t want, or can’t handle: a best friend. Beyoncé is twerking and telling us to “bow down,” while Katy Perry is kissing girls, and Nicki Minaj is telling “skinny bitches” to fuck off as she parades her giant ass around in a g-string. When I wrote about pop music feminism in 2014, I noticed the trend of women beginning to partner up in pop—something that in some instances might be PR tokenism (Beyoncé and Nicki Minaj) and other cases seems borne out of a purer, more female-centric agenda (like Charli XCX and Rita Ora). But for the most part, women in pop act as though they’re better than you, and they know it (I’m not saying that’s a bad thing, I love the attitude, and I think right now it’s necessary to really break down power structures in such a male driven industry). They’re intimidatingly cool and sexy and big-rumped and ample-bosomed. They’re male fantasies masquerading as near-nude messages of empowerment. They’re reclaiming their bodies and telling us how to see their sexuality and it’s marvelous and confrontational and sometimes annoying, but we’ll look back and tell our daughters that this era in pop was revolutionary for women’s bodies.