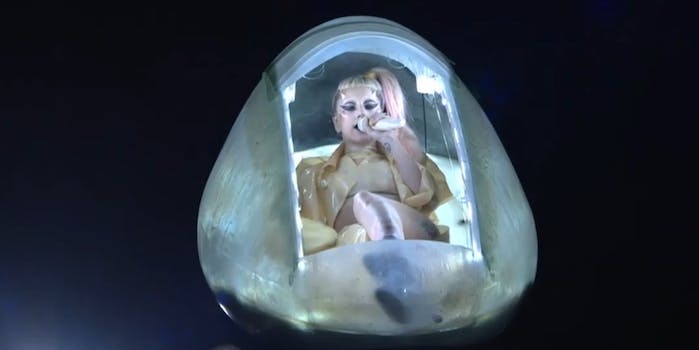 The pop star has erased most of her tweets and gone back inside her egg.

A couple of years ago, Lady Gaga burst onto the stage from an egg at the Grammy Awards. Now she’s going back inside the egg.

Gaga’s pretty much shunted her Twitter account back to the womb, reinstating the default egg avatar and deleting all of her tweets from the last five months. A few retweets remain, but this is a Twitter account that’s been sanitized of its last few months of existence. 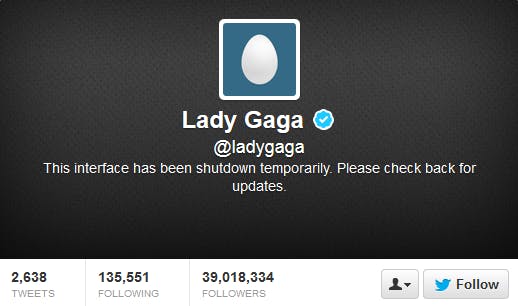 But what does it all mean, Mama Monster? Why have you forsaken the interface of Twitter?

Here are our theories why Stefani Germanotta (if she’s going back to the egg state, her name should regress too) sanitized one of the planet’s biggest Twitter accounts.

1) She’s working on her new album

The Internet’s ruined the mystery of making art. All too often, we see behind-the-scenes shots and videos of movies being made, dips and drabs of anticipated novels, and nuggets of new songs being pushed onto the Web before they’re fully cooked.

Gaga’s reportedly working on her third album, and maybe she wants to grab back the air of mystery that’s missing from art. The last time we really saw it was David Bowie exploding from nowhere with a new record this year. Maybe she wants to remerge with new album in hand in a similar way.

Gaga’s pulled her share of attention-seeking stunts. That meat dress way back when is a notable one. If it is a ploy for attention to get people talking about where she’s gone and her missing tweets, it’s a sneakily clever one, and a trick that’s obviously working.

It’s a far more subtle Twitter ploy than we’ve seen from the pathetically desperate Amanda Bynes over the last few months. Gaga’s getting attention by doing the opposite of tweeting: she’s deleting things she’s already said. So smart.

3) A wizard put her under a spell

Maybe Gaga was forced to hit the delete button on dozens of tweets by a wizard elf who then forced her into a giant cocoon to get some slumber after the operation she had a while back to rest up and think really long and really hard about her next record. Her army of fans expects great things and there’s a lot of pressure riding on her so she really just needs a break from this whole Internet nonsense because if she loses focus and her next record sucks she’ll lose all her followers and fans to Bruno Mars and One Direction. That just can’t happen or the record company will get really mad and not let her put dresses made from fairy dust on her expenses anymore.

Hey, it’s a theory. There are no wrong answers when it comes to speculation.