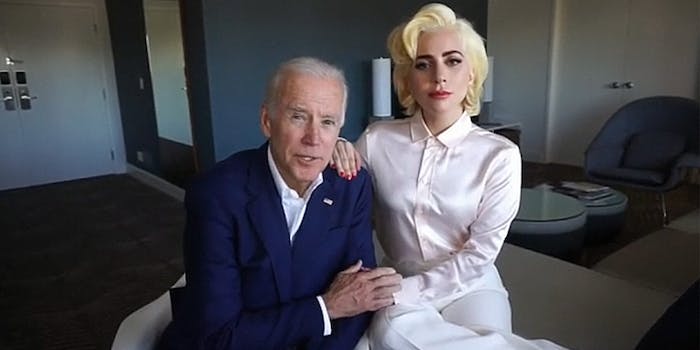 Biden and Gaga have a very important message.

In the last week Lady Gaga has performed for five ex-presidents and filmed a PSA about sexual assault with an ex-VP.

Gaga joined Joe Biden to highlight his It’s On Us campaign—launched in 2014 to address campus sexual assault—with a new video. Lady Gaga has been open about her own experience with sexual assault, and Biden introduces her as a “fierce advocate.”

A message from me & my buddy Vice President @JoeBiden @ItsOnUs to stop sexual assault. Go to https://t.co/aMd5silSst #ItsOnUs to help. 🇺🇸 pic.twitter.com/w5JGRCd2z8

Biden introduced Gaga last year at the Oscars as well, when she performed “Til It Happens To You.” He asked the audience to “take the pledge” and “change the culture.” In the PSA, Gaga says she knows the weight a survivor carries—”It can be terrifying, waking up every day feeling unsafe in your own body”—but urges people to reach out to someone they know and trust if you’ve been assaulted or harassed.

It’s On Us also teamed up with Comedy Central for a short sketch highlighting how men can help if they see women being harassed or assaulted.

It’s On Us PSA: Action Guy