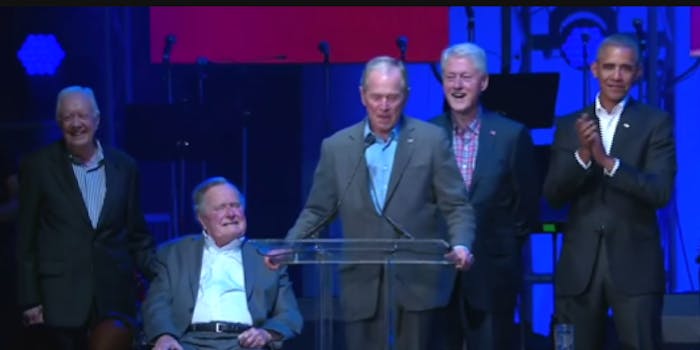 5 ex-presidents joined for hurricane relief, while Trump played golf—and Twitter let him have it

The current commander-in-chief was nowhere to be seen.

While five ex-presidents traveled to Texas on Saturday for a fundraiser to benefit Americans victimized by this year’s devastating hurricane season, President Donald Trump spent the day at the Trump National Golf Club in Virginia on one of the many courses he owns.

Former presidents Barack Obama, George W. Bush, Bill Clinton, George H.W. Bush, and Jimmy Carter all convened for the historic and high-profile get-together, aimed at assisting the hurricane recovery effort. Two of the men—Carter and the elder Bush―are well past their 90th birthdays, but neither was deterred from showing up.

The 71-year-old Trump, by comparison, spent the 70th day of his presidency at a golf course, according to the exhaustively detailed Trump Golf Count. That amounts to nearly one-fourth of the total number of days he’s served as commander-in-chief.

Bush the elder, 93 years old and in recent years confined to a wheelchair, had the shortest trip to attend. He’s a resident of Houston and the event was held at Texas A&M University, nearly 100 miles away in College Station. It was a benefit concert featuring Lady Gaga, Yolanda Adams, and Lyle Lovett with iconic country singer Lee Greenwood serving as the master of ceremonies.

All the living Presidents (and Lady Gaga!) gather to raise millions for American hurricane relief. Trump was golfing. pic.twitter.com/xSj1Ie1XPV

The overall hurricane relief effort, according to NPR, has pulled in at least $31 million since it began in early September. As for Trump, it’s not a matter of public record what score he shot on the links on Saturday or if he even definitely played, so it’s impossible to tell just how worthwhile the trip was for him. Trump did record a brief video message that played at the Texas event, reportedly describing the five ex-presidents who showed up as “some of America’s finest public servants.”

When you’re too busy golfing on the tax payers’s dime that all you can do is send a video? https://t.co/UJc5BxMTHy

Unfortunately for anyone who hoped to see the president put in an appearance too, he clearly had other plans.