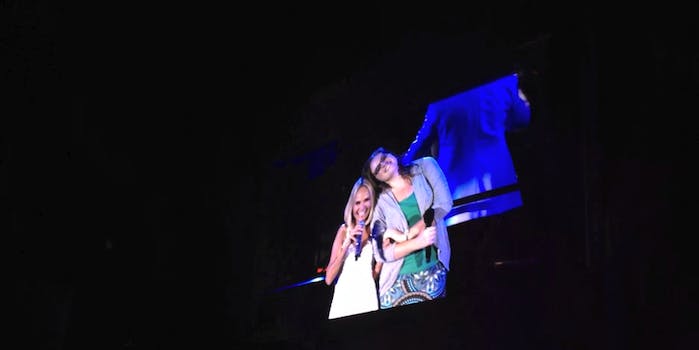 Sarah Horn didn't plan on being onstage at this L.A. concert, but look at the green girl go!

A Los Angeles woman has become an online celebrity after footage of her singing with Broadway star Kristin Chenoweth at the Hollywood Bowl on Friday went viral over the weekend.

Sarah Horn was enjoying the musical stylings of Chenoweth from her box seats when all of a sudden the miniscule performer started interacting with the audience. At one point, Chenoweth asked a woman standing in front of Horn if she was familiar with the song “For Good” from the musical Wicked. Horn unexpectedly blurted out that she knew it, which led to her being invited on stage by Chenoweth for a duet.

Once there, Horn revealed that she’s a voice teacher (according to the news station KTLA, she teaches at California Baptist University and the Riverside Youth Theatre). What happened next was something straight out of a fairy tale.

As luck would have it, the entire heartwarming moment was captured by Horn’s friend Mike Kestler, who uploaded the footage to YouTube on Saturday. The serendipitous song soon found its way to social news site Reddit, where it made the front page of r/music. Since its posting, the clip has amassed more than 1.1 million views on the video sharing website.

Here’s a much closer look at the beautiful duet.

On Sunday, Horn retold her magical moment to Broadwayworld, a site devoted to theater coverage.

“I heard the roar of the crowd during that first line but then it all faded away. I think I’ve seen it done cinematically before but I never imagined my perception of a performance would appear like this,” she recounts.

“The 10,000+ people of the Bowl faded away. There was no one else there. No noise. No people. I could heard the beautiful music of the orchestra but there was no one onstage, just Kristin and I. I reached my hand out as I sang the word ‘friend’ and she stepped forward and took it. There was such joy, elation, a spontaneous musical spark that we shared in that moment. It was unlike anything I have ever experienced.”

At the end of her first-person account, Horn said that her father had once prayed that she would one day sing alongside Kristin Chenoweth.

“I smiled an even larger smile, grasped his arm, and asked him to keep praying impossible prayers because they just might come true,” she concluded.