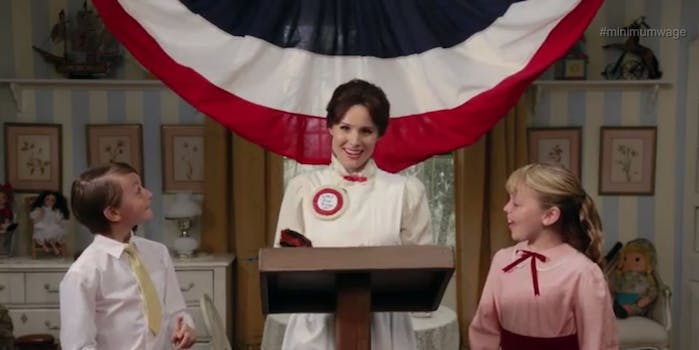 It's practically perfect in every way.

A spoonful of sugar helps the social commentary go down.

Disney’s beloved English nanny Mary Poppins can sing, dance, and even make magic. So why won’t the wealthy Banks family pay her any more than minimum wage?

This is the topic explored in FunnyOrDie’s latest video, “Mary Poppins Quits.” Veronica Mars star Kristen Bell assumes the role of Poppins, breaking the news to young Jane and Michael Banks that she is leaving for good this time. She proceeds to explain—in a hilarious parody of “A Spoonful of Sugar”—that the federal minimum wage of $7.25 per hour places her standard of living (and that of the cartoon penguins) well below the poverty line.

Mary Poppins Quits with Kristen Bell from Funny Or Die

While such a wage may have been beyond generous in 1964, the year Mary Poppins was released, these days it just doesn’t cut it. We suspect her chimney sweep pals would concur.