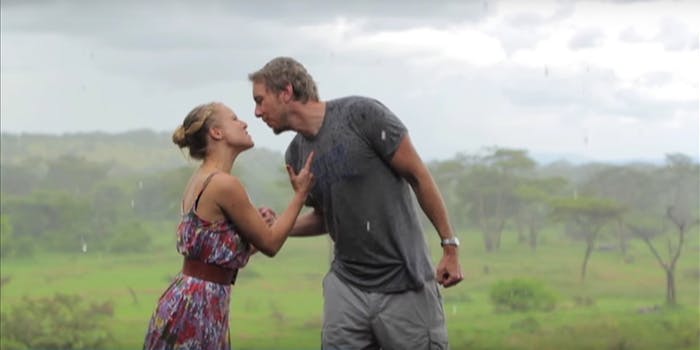 Kristen Bell and Dax Shepard have upped the ante when it comes to sharing one’s vacation online.

At some point before Bell and Shepard had their two children, they took a vacation to Africa (although they didn’t specify which country or countries). They figured that nobody would want to look at their photos, so instead they killed two birds with one stone by creating a music video of their vacation with an homage to Toto’s famous hit “Africa.”

“This was our last trip before having kids,” Shepard wrote in the video description. “Our sole objective was to rage hard and honor Toto properly. Hope you enjoy.”

It’s more than five minutes of pure, unadulterated goofiness, as Bell and Shepard lip sync to the song, pretend to strum on bamboo, and dance in the rain—while sometimes bringing a tour guide into the frame. We wouldn’t expect anything less.

While their fans loved it, they even managed to catch the attention of Toto’s Steve Lukather in the process.

@stevelukather @IMKristenBell hey Steve! Been talking a lot to David. There's actually no joke here. We are very sincere about this :)