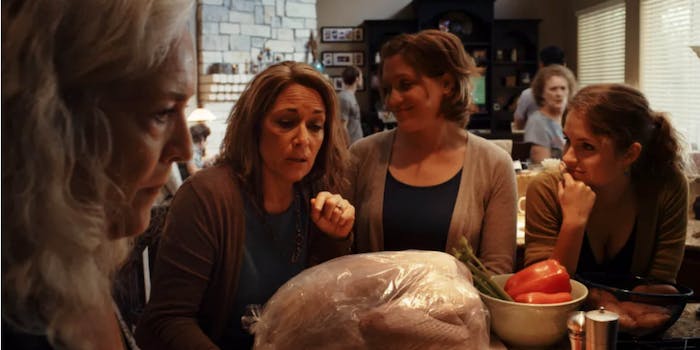 ‘Krisha’ is the best Thanksgiving movie

'Krisha' is a dizzying depiction of Thanksgiving as a haunted house.

Thanksgiving movies haven’t quite evolved. With some exceptions (For Your Consideration gave us the meta Thanksgiving we need), they’re often safe family dramas or quirky rom-coms that make amends or teach a valuable lesson, so you can feel some sense of shared experience around the holiday. Krisha doesn’t make amends, but it does illustrate how families gather a lot like storm clouds.

Krisha, the debut film from Trey Edward Shults, begins and ends with a face: Her chin trembles and her eyes well up. She seems like an alien dropped into a human body, trying to assimilate. This is Krisha, played by Shults’ real aunt, Krisha Fairchild. The film quickly cuts from that ominous introduction to her arriving in her truck, the hem of her dress stuck in the driver’s side door. She’s missing the tip of her finger, but the film doesn’t offer an explanation.

Shults, whose latest family-focused heartbreaker Waves debuted this month, filmed Krisha with several family members over the course of a week in 2012. Fairchild plays the titular role: A woman who shows up for Thanksgiving dinner, allegedly sober after a decade away, with the intention of reconciling with her estranged son Trey (played by Shults). Shults’ therapist mother, Robyn, plays Krisha’s sister, and his maternal grandmother, Billie, also stars. In one of the most emotional scenes, Billie, who had dementia, struggles to remember who Krisha is, as Trey watches in the background, possibly trying to do the same—the generational passage of pain rendered like a painting.

Director Augustine Frizzell appears in the film, as does veteran indie actor Bill Wise, but working with actual family only adds to the chaos that follows. You might recognize the emotional fatigue that comes with trying to help a loved one only to be let down, or the stress of walking on eggshells. Alternately, the film makes the viewer look inward, to catalog whether we’ve ever been the person who sucks all the air out of the room.

Shults has said the film comes from real experiences with family members, including a cousin who overdosed after a family reunion. Fairchild, who is an actor, appeared in films Shults made when he was younger; he seems to remember one where she was a tax collector and there was a murder. “It was terrible, we were children,” he told the Daily Dot before the release of Waves. “It was a dream growing up because she was the closest thing to anyone in the industry. Because she was a successful actor… I always wanted to give her a great part.”

While Fairchild is immensely engaging—when she’s put in charge of the turkey, we’re emotionally invested—the soundtrack and cinematography give Krisha its shape and pace. The conversations follow familiar beats of a family gathering; one between Krisha and her brother-in-law (Wise) turns from joking to accusatory, as she notes that she’s working to better herself. Knowing that’s what addicts often say, he lays into her: “You are heartbreak incarnate, lady. …If you think you can just pop in and out of people’s lives like this, you are malinformed.” We watch as Krisha follows Trey around and eavesdrops. Couples make out, babies cry, shirtless guys wrestle. As Krisha walks in circles, trying to calm herself after losing the turkey timer, the camera catches Trey as he enters and leaves her orbit, a masterful distillation of longing and alienation.

Later, Nina Simone’s “Just in Time” syncs up perfectly with Krisha secretly popping the cork on a bottle of red wine. This destroyer of worlds slinks around the kitchen like a ghost. The turkey’s slow-motion demise is spectacular, mirroring Krisha’s own self-immolation. Maybe that’s what more Thanksgiving movies need? The overstuffed symbol of consumerism decimated in front of us?

Waves repeats some of the dizzying spins that make Krisha so unsettling, but here it’s more effective in creating that organic sense of being trapped, of a home becoming haunted by someone you know but not really.

You can stream Krisha on Netflix.