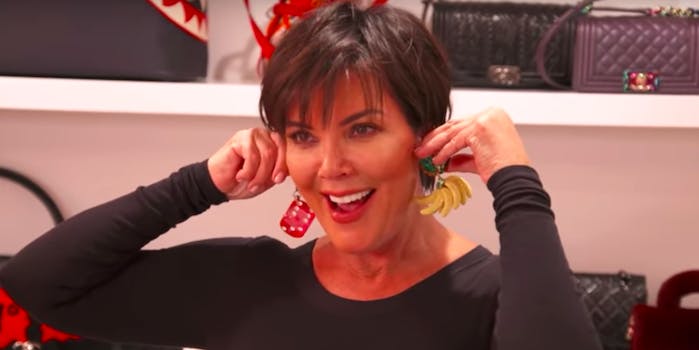 While the two-night episode of Keeping Up With The Kardashians finally revealed sister Khloe’s not-so-secret pregnancy, the real shocker was matriarch Kris Jenner going under the knife for an unusual surgery.

In Sunday night’s episode, the 62-year-old confessed to daughters Khloe, Kim, and Kourtney of her “earlobe insecurity” while the three were helping her pick out an evening outfit. At one point in the episode, Jenner even wore ear muffs around the house to keep her “big earlobes” away from lingering eyes.

Khloe was the first to speak up and tell her mom she was being overdramatic, quickly teasing her by asking, “Is that why you wear diamonds so big?” to which Jenner replied, “I can’t afford to get my diamonds any bigger!”

But she can afford earlobe surgery. Fans watched as the momager walked into the office of Dr. Jason B. Diamond’s—a Beverly Hills surgeon—who sealed the deal with the news that the reduction procedure could be completed in 3o minutes.

According to Page Six, the surgery costs a few thousand dollars, sometimes even for each ear.

Audiences were less than amused by the ordeal.

Kris Jenner no one gives a shit about your ear lobes. WE WANT TO KNOW IF KYLIE IS PREGNANT.

Since she debuted her “new ears” the same day Kim Kardashian West and Kanye West announced the birth of their third child via surrogate, fans can’t help but wonder if Kris Jenner really does control everything.

The real question is, how many more cosmetic surgeries will she get before Kylie confirms she’s pregnant?