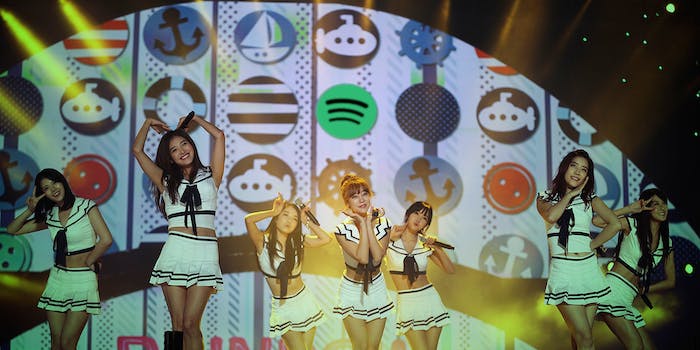 Ah, the glory of K-pop. Flawless eyeliner that never runs, men with abs Michelangelo would envy, women with legs that never seem to end. It’s a polished, enviable world, even if it is one of Korea’s most carefully manufactured exports.

Keeping up with K-pop is a full-time job, with dozens of new releases coming out every week. For the casual fan, it’s nearly impossible to sort through it all. That’s why we made you a Spotify playlist to check out exactly why thousands upon thousands of fans will flock to New Jersey this weekend for KCON, an annual Korean culture celebration that’s celebrating its fifth year in 2016. Packed to the gills with K-pop stars, Korean makeup gurus, and culture panels, it’s the ultimate event for any fan.

Our playlist covers all the bases with firsts like NCT U’s debut “The 7th Sense” and unfortunate lasts, such as “Hate” by the recently disbanded 4Minute. We’ve compiled some of the year’s hottest tracks so far, including ones by the artists in this year’s KCON lineup for both New York and L.A. Check it out.

There are a few must-listen tracks of 2016 that weren’t on Spotify, but we had to mention them. First up is BTS, our personal pick for the artists innovating the industry, with their hardest-hitting track yet, “Fire.”

Twice is also nailing girl pop perfectly with “Cheer Up,” and the overt sexuality that many have complained is tainting K-pop as of late is noticeably absent. The rookie group will likely be bringing this song to KCON LA and has just achieved 50 million views in a record 58 days.

U-Kiss have been around for a while, and can sometimes be inconsistent with quality tunes, but the boys are on point with “Stalker,” which is surely blaring out of cars already.

The multinational boys of Got7 have soared onto multiple Billboard charts with “Fly.” The song serves as a marker for the beginning of their first U.S. tour, which takes off in Dallas next month.

Ready several flame emojis, and pass it on.